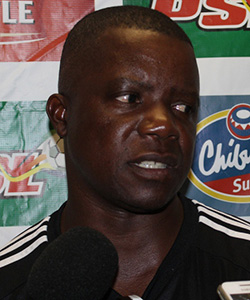 HIGHLANDERS coach Bongani Mafu rapped his players for a lethargic display in Sunday’s 1-0 home loss to Chapungu.
Allan Tavarwisa’s early strike was enough to separate the two sides and hand the Bulawayo giants their second loss of the season.
After the match, Mafu was a target of some section of Highlanders fans who called for his ouster.
Highlanders have so far scored just two goals in five matches and their other defeat was at the hands of ZPC Kariba in their opening match of the season.
They are on seventh position with seven points.
Sunday’s defeat was Chapungu’s first win of the season and they started the day at the basement of the log but are not placed at 11th spot.
Mafu tore into his charges, accusing them of failing to rise to the occasion.
“We did not play any football. We did not come to the party,” Mafu said.
“We were off colour. Throughout the match we lacked creativity, imagination and the desire to win.
“When you have attitude and then allow the visitors to score it will always be difficult for you to come back. We were our own enemies and we got punished.”
The slow start has placed Mafu’s tactical ability under severe scrutiny.
Highlanders strikers have also come under spotlight for having not scored in five matches with the two goals the team has managed have come from other departments.