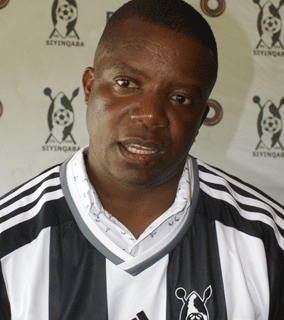 HIGHLANDERS coach Bongani Mafu is impressed with pre-season developments in his side following Sunday’s 1-1 draw with Chapungu in a friendly match at Barbourfields Stadium.
Chapungu new signing Tongai Magwendere scored the opening goal of the afternoon in the first half before Ozias Zibande equalized on 72 minutes.
The visitors finished the match with nine-man after another latest signing Smart Muchabaiwa and Hillary Mugoniwa were red-carded in either half but Highlanders could not capitalize on that.
Mafu blended new and old players in the match which featured Marshal Machazane, teenage striker Thomas Chideu, Mlungisi Ncube, Ashton Mhlanga, Julius Daudi and Lindelani Ncube as new arrivals.
Seniors players who participated included Felix Chindungwe, Simon Munawa, Ariel Sibanda, Knox Mutizwa, and Bruce Kangwa who was playing as an attacking midfielder from his usual left-back position.
“It is still work in progress. Everything looks positive so far and I see a lot of potential in this team,” Mafu said.
“We were not looking at results but shaping the team through creating combinations. We are not favorites to win the title and that is a misplaced assertion because we are still building a team. Our aim is just to do well this year.”
Douglas Sibanda has returned from loan at Shabanie Mine and would be playing at centre back.Advertisement