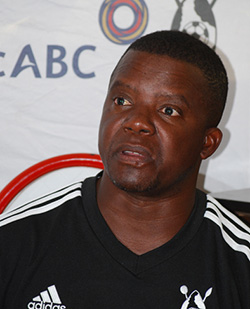 HIGHLANDERS coach Bongani Mafu is seeing a new confidence in his boys after the Bulawayo side finally beat Dynamos in the ZNA Commander Charities final at Rufaro Stadium on Sunday, winning 1-0.
Obadiah Tarumbwa scored the winner after 50 minutes of play slotting home after a defensive mix up between Dynamos goalkeeper Artwell Mukandi and his defence.
They lost 3-2 in a league match and drew the reverse 1-1 at Barbourfields. Before that they had lost 1-0 in the Bob91 Super Cup final.
The last cup victory for Bosso came in the 2011 Independence Trophy final at the National Sports Stadium when Highlanders won 4-2 on penalties. Then, they were under Mkhuphali Masuku.
But, they came right this time holding on for 40 minutes of the second half to walk away with their first silverware of the season and $12,000 in cash.
“We have to enjoy this victory while it lasts, it has been a very long time,” said Mafu.
“The win is very good for the players; it’s something that they have worked very hard for and they deserve it.
“We have long suffered and I think this victory should give the boys a chance to at least smile about something.”
Highlanders play How Mine this weekend as the Castle Lager Premier Soccer League resumes after a break to allow the Under 23 side to play South Africa in an Olympic qualifier.
“This is the kind of confidence I have been preaching to the boys since I started at Highlanders and I knew they would come right.
“But it would be of no use if we can’t carry it forward in the league matches, especially at Barbourfields,’ Mafu added.
Mafu  threw Dynamos off-course when he had intimated on Thursday that he will field a second string side but turned up with a near full strength team that had Tarumbwa, Felix Chindungwe, Edmore Muzanenhamo, Webster Chingodza and King Nadolo.
But he also gave playing time to young defender Honest Moyo, anchorman Tendai Ngulube and Rahman Kutsanzira, who have been playing off the bench this season.
Dynamos new coach Tonderayi Ndiraya, who took over from David Mandigora on Friday, blamed the loss on defensive errors.
But the Dynamos fans will not forgive him that easily as Dynamos have not lost to their traditional rivals since 2006 in the league.
Now Dynamos have to regroup in time to face troubled ZPC Kariba this weekend, who have not won a single match in four starts since Sunday Chidzambwa took over.Advertisement