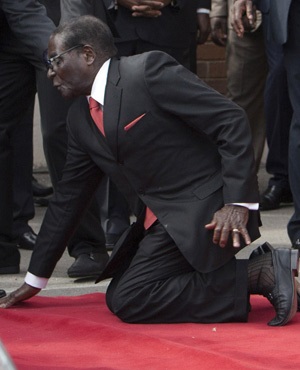 WHEN the rumour of what had happened in Harare began to filter through the social networks yesterday and then the images of the fall began to emerge, I deliberately held back on commenting publicly on the matter. The fall of President Mugabe, as he descended the steps of a podium, has generated a lot of excitement and commentary quite apart from the large number of memes on social networks.
But I kept my thoughts private. I am a boy from the village. And in the village, there were many elderly people. I grew up with the elderly around me and learnt to respect old age. In that part of the world, there is a saying that when an elder farts, the child does not shout that he has farted, even if it is a loud fart. You maintain a stoic silence and get on with it.
However, I observed with great fascination, the mixed reaction provoked by the incident. Social networks were awash with news, pictures and memes of the Presidential fall. Typical of anything that goes on around the person of President Mugabe, opinion was sharply divided between those who found cause to laugh and those who were more sympathetic.
The sympathisers were also disgusted by the behaviour of those who were taunting and laughing at Mugabe. For the laughing group, this was evidence to confirm what they have always argued – that Mugabe is now too old to rule. It seemed like a vindication of their view. But for his sympathisers, there was nothing abnormal or newsworthy – any person can fall.
I suspect there were many others like me – those who had their opinions on what had happened, but chose to keep them to their private spaces. On Thursday morning though, I woke up to read the papers and what I read changed my approach to the incident. I was shocked by what I read in The Herald.
In an article entitled, “President in carpet mishap”, The Herald tries hard, too hard, one might add, to sanitise the incident. It is not a very good effort. I had not laughed at the fall. I had felt sorry for the President, as a human being. But I did laugh at the comical attempt by the state media to put a spin and white-wash the incident.
And, in some ways, I suspect it is these comical efforts that cause people to end up laughing at things that they really should not be laughing at. It reminded me of Comical Ali, Saddam Hussein’s propaganda chief who, at a time when pictures were showing that Baghdad was already under siege, spoke with a straight face, claiming in bombastic fashion, that the ‘infidels’ were facing imminent defeat.Advertisement