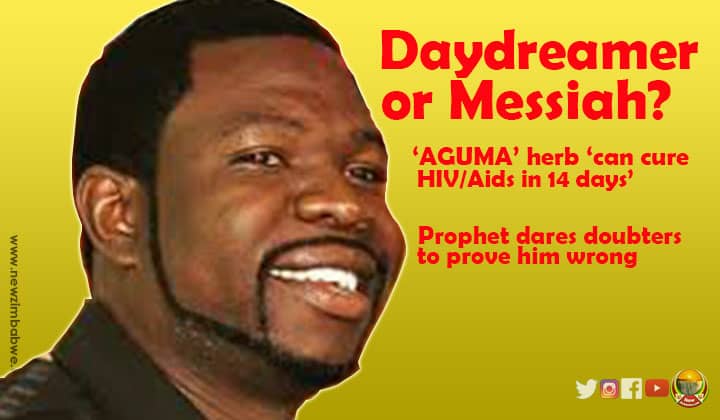 PROPHETIC Healing and Deliverance (PHD) Ministries founder Prophet Walter Magaya has made astounding claims he has discovered the elusive cure for HIV and AIDS.

The “cure”, according to the popular preacher, is in the form of a herb he called AGUMA, which he says has the magical powers to destroy the virus within 14 days of one taking it.

“As you continue to take the AGUMA, you start to see your CD4 count disappearing until you become HIV negative,” Magaya announced at his Harare church on Sunday.

Magaya was addressing a group of local and foreign journalists who were flown from various African countries such as Angola, Botswana, Eswatini, Ghana, Kenya, Lesotho and South Africa.

“The herb is 100 percent organic. Why I saw so is because we found out that there are no side effects.”

The Harare prophet said he was already working with the Zimbabwean government which is taking his “cure” through some laboratory tests to see if his claims were feasible.

“With the government of Zimbabwe, they are summoning the local research board, the Minister (Health) has already indicated to me that they are bringing people that are HIV positive and start testing them,” he said.

Magaya said he discovered the “cure” some two years ago but used it secretly on HIV positive persons to first prove its effectiveness before he could boldly go public about it.

He said he has also engaged the World Health Organisation (WHO) about his discovery but was told that the UN health agency could only deal with him through the Zimbabwean government.

The youthful preacher said while he waited for government to test his claims through laboratory tests, he will, in the meantime, start selling the “cure” to the public through his church.

At one time, he said, he was offered US$56 million by an American pharmacy as payment for the herbs’ rights and to reproduce it, but he declined the offer insisting he wanted to save Zimbabwe and the entire world.

In attempts to win the confidence of the public over his claims, Magaya brought to his church, some Indians who he said he has been working with in their state-of-the-art laboratories and were also convinced this was the magical panacea for HIV and AIDS. He said they first signed a non-disclosure agreement.

For discovering the herb that totally annihilates HIV, Magaya said this has put his life in danger from anti-retroviral drug manufacturers who now fear being pushed out of business.

He said the companies “were not very keen on finding the cure but the vaccine”.

Magaya was quick to allay fears the herb could go extinct any time soon, adding that the country had enough of the plant even to cater for the whole world and that even if he were to die today, all the information about the herb was now sufficiently available.

“And I tell you that it’s a plant we have protected; just for you to know we are the first people who discovered that plant. So we have intellectual rights over that plant,” Magaya said.

He also refused to share some of the chemical components that were being mixed with the herb saying there was not need to as those who produce anti-retroviral drugs have not also shared their secrets.

“You can be told a chemical formulation of a cafenol but they won’t tell you the plant.”

“Can you tell me the plant that makes Coca Cola? Because I strongly believe that Coca Cola has kept it for the sake of intellectual property rights,” he said.