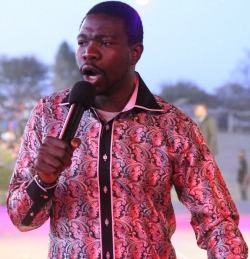 LEADER of Prophet Healing and Deliverance (PHD) ministry and Yadah Football Club owner prophet Walter Magaya said he fired his entire technical bench because they defied his “prophetic word” on team selection.
Magaya, who is also the “technical director”, accuses the head coach Jairosi Tapera of choosing to follow his “dream” over his prophecy which he said led to the promotion of the team to the Premier League.
He said he is “solely responsible” for running the affairs of his team and won’t allow a situation like at the Zimbabwe National Team where soldiers and policed officers are involved.
The new premiership boys were Saturday humiliated 7-2 by Bantu Rovers after losing 1-0 to Dynamos FC and to Chapungu.
On Saturday, only team manager Munyaradzi Sinani, team medic, Victor Katsande, and physiotherapist Mike Mavhura sat on the bench.
Magaya Friday told his congregates that the head coach was no longer with the team because he failed to adhere to his prophetic word when his team played against Dynamos FC and Chapungu FC.
“He is no longer with the team, I told him: go back to your house,” said Magaya to a round of applause, ululating and clapping.
He added, “If he is going to come back he will come back after I am certain he is not going to play me like that. He did it at Chapungu. I am giving him an instruction and say to him, play this player here and he goes to Chapungu he swaps them.
“The guys said the game couldn’t flow well, I said how come I was with you the whole week.
“One of the players came to me and said we don’t have a left back and a right back, (because) he (coach) exchanged them. Yet this consists my name.
“I told him to play this player and that player and he said no I had a dream.
“You were listening to a coach who says he has a dream, while I came all the way with you from Division Two.”
According to Magaya football matches are spiritual.
“And you listen to someone who says I have a dream over my prophetic word!”
Magaya said the “funny part” was that the player the coach had a dream about was the one who destroyed the team.