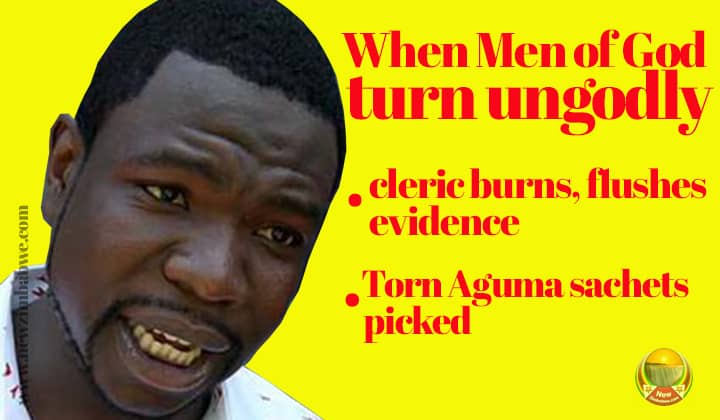 PROPHET Walter Magaya and his workers flushed through the toilet system and further tried to burn containers of the preacher’s HIV/Aids “cure” when they got wind of an impending police raid on his Malborough premises in Harare, a court heard on Friday.

The Prophetic Healing and Deliverance Ministries founder is in the eye of the storm over claims he made at his church last Sunday that he had stocks of his Aguma capsules he said had properties to cure HIV/Aids and cancer.

His statements elicited a frenzied response from government, NGOs and ordinary Zimbabweans with the state later dragging the under fire cleric to court for jumping the gun to declare his medicinal innovation without first clearing with the relevant arms.

Government also feared Magaya’s claims could push those surviving on life prolonging ARV drugs to abandon the therapy with a false belief there was a more substantive solution to the condition.

This was after a warrant of search and seizure was issued at the Harare provincial magistrate’s court Wednesday with police later conducting a raid at his Malborough property to seize unregistered prescription preparatory medicines, drug manufacturing, packaging machines and drug manufacturing raw materials.

“Just before the search, accused persons destroyed some of the exhibits by flushing the Aretha in the office toilets and burning the containers which were however recovered half burnt,” said the state.

“Several Aguma sachets and other torn sachets were also recovered in an office bin next to the call centre office.”

Magaya was on Friday granted $300 bail coupled with some reporting conditions.

He will be back in court November 26 pending trial.

Prosecuting, Sebastian Mutizirwa said, “Circumstances are that on October 31 the accused made an advertisement on Yadah TV of Aguma medicine which he claimed to be a cure for HIV and AIDS, cancer and other ailments.

“He further made claims on Aretha Medical website www.arethamedical.com and that Aretha medical and himself were manufacturers of the Aguma medicine or drug.

“The website was visited, and it was discovered that Magaya claimed that they had conducted some clinical trials and proved that the Aguma medicine can cure HIV and AIDS,” read the request for remand forms.

The state alleged that verifications were made through Medicines Control Authority of Zimbabwe (MCAZ) on their records and it was established that neither Magaya nor his company were authorised by Health Professions Authority to carry out clinical trial on any human being to prove that Aguma can cure the diseases thereby committing an offence,