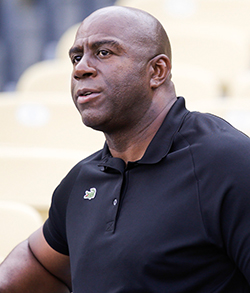 TWENTY-FIVE years ago Monday, Magic Johnson shocked the world when he announced that he was HIV-positive.
The Basketball Hall of Famer notes in a post on The Playbook,his website, not only the anniversary but also how things have changed in the past quarter-century.
“Today is a celebration of life, a celebration of what some people thought was a death sentence 25 years ago. It’s a celebration of everything I’ve been through until now.”
But first he had to get through the announcement all those years ago.
“Up until then, I thought the hardest thing I’d ever done was play against Michael Jordan or Larry Bird, but on this day I began the fight of my life. This day, I began to realize how God was working in my life.”
As Johnson says, back in 1991,a diagnosis of HIV or AIDS was considered a death sentence of sorts that affected relatively narrow segments of the population.
On Nov. 7, 1991, that all began to change —although, Johnson writes,”telling the world was a different ordeal.
Since that dayhehas become a successful businessman, focusing on offering opportunities and development in urban neighborhoods, and he continues to shatter misperceptions about HIV/AIDS.
“Out of necessity, I was forced to rethink my life and adjust. It was vital for me to adapt from the life of an NBA player to that of a spokesman for HIV/AIDS and a businessman. Whether out of necessity or desire, change is inevitable. Trusting in God and accepting His plan for my life is a big part of why I am here today. My growth and development as a person and as a businessman have transformed over the last 25 years.”
To read Johnson’s entire post, click here.Advertisement