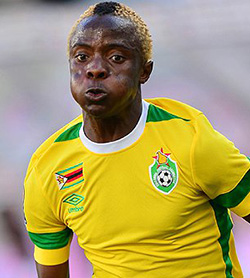 WINGER Kudakwashe Mahachi says his immediate aim is to help Golden Arrows collect nine points before the Christmas break rather than worry about making Zimbabwe’s AFCON squad.
Arrows will end the year with clashes against Bidvest Wits, Baroka FC and Kaizer Chiefs.
“I’m still coming from injury. I’m still behind when it comes to form and fitness. But I’m trying to get there.” Mahachi tells KickOff.com.
“But for now my mind is not entirely on making the AFCON squad. I will worry about that from the 22nd of December. Now I’m focusing on Golden Arrows, we want to win our last three games so we can get the nine points we are targeting.”
Abafana Bes’thende started the campaign strongly but are currently riding a three-game winless run, most recently losing 1-0 at Ajax Cape Town on December 3.
“The games are coming thick and fast and that makes it difficult to maintain that form. It’s up to us as senior players to guide and lead the youngsters,” says Mahachi, who has appealed to the fans to make their presence felt in their upcoming home games against Wits and Chiefs.
“We are left with two games at home and the last one will be against Kaizer Chiefs so they must come in numbers to support us, so that when the league resumes again next year we find ourselves in a respectable position.”
Clinton Larsen’s side are sixth on the table with 18 points from 12 matches ahead of their next game with the Students at Princess Magogo Stadium on December 14.Advertisement