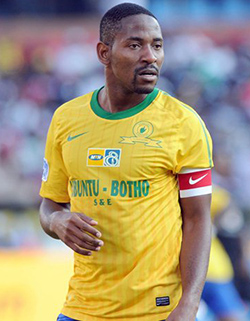 KUDA Mahachi joined the Brazilians at the beginning of the season, but media reports suggest that he will be leaving when the January Transfer Window opens.
Despite having exceeded their foreign quota for the season, Mamelodi Sundowns are linked with a number of international players ahead of the January Transfer Window period.
Zimbabwe international and Sundowns midfielder Kudakwashe Mahachi could be on his way out of the Chloorkop side on loan, with a move back home reportedly on the cards.
According to reports, the 21-year-old left-footed winger could be joining his former team Highlanders in January.
Mahachi’s business manager Mlungisi Moyo confirmed that his client is most likely to leave the Brazilians on-loan, but admitted that he would have liked to see the player move to another South African side.
“We would have wanted him to go on loan to another South African team where he will get game time, nothing has materialised as yet,” Moyo said.

The Bulawayo-born attacker has made only six Absa Premiership appearances and netted just once against Moroka Swallows so far this season for the Tshwane giants.
Mahachi’s countryman Method Mwanjali is also believed to be on his way to Highlanders.
The Brazilians and Bosso side have established an effective working relationship, which has seen Sundowns acquiring players and loaning them back to Highlanders recently.
Sundowns are also linked with former Highlanders players Vusa Nyoni and Honour Gombami, who are playing for Belgian Second Division sides Mons and Antwerp respectively.
Brazilians team manager and Zimbabwean football legend Peter Ndlovu is said to be the man behind the possible moves, according to sources close to the two players.
“Sgcebhe (Vusa) and Honour will be returning to Africa in January if all goes well. The deal is almost halfway done, but what I can tell you is that Peter Ndlovu is behind the move,” said the source.Advertisement