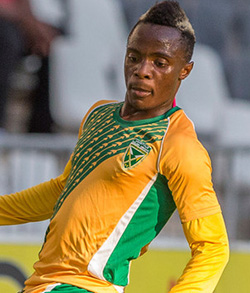 SOUTH Africa: Golden Arrows winger Kudakwashe Mahachi says he and his teammates are not putting themselves under unnecessary pressure to repeat their Nedbank Cup heroics against Mamelodi Sundowns when they meet in the league.
Abafana Bes’thende ousted the Brazilians from the seven-million Rand cup in the Round of 16 stage, Nduduzo Sibiya netting a sublime solo effort to see them through.
However, Mahachi says the weight of expectation going into Friday’s Absa Premiership clash with the African champions has not intensified given the last result.
“We are not putting ourselves under pressure.” Mahachi tells KickOff.com. “We are working hard as a team to stay in the top eight position, so we will fight with our lives from the first whistle until the end. It’s a big game for the club and the players.”
The former Sundowns player went on to reveal that he doesn’t feel any pressure to prove a point every time he comes up against his former employers.
“I don’t have the pressure problem. I’m not playing to prove anything to anyone. It’s not like I’m playing to get noticed by Sundowns or as if I want to go back to Sundowns.
“I’m old enough now, unlike the first time I came to South Africa when I was still young and playing to impress everyone. I’m matured enough now and I’m happy where I am.”

The Zimbabwe international says the performance they produced in the Nedbank Cup quarterfinals will have no influence on tomorrow’s league encounter.
“We respect them they are African Champions and this time it’s a different ball game altogether and last time it was a cup game. They are fighting for the league, we are fighting for top eight,” Mahachi stated.