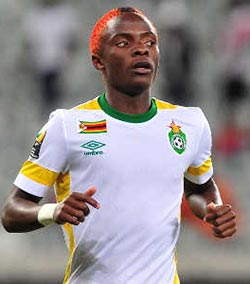 ZIMBABWE’S exciting midfielder Kuda Mahachi believes that the Warriors can build on their Chan 2014 momentum and qualify for the next Africa Nations Cup finals.
Mahachi was one of the standout players for Ian Gorowa’s team that finished fourth in the Africa Nations Championships in South Africa, having lost 1-0 to Nigeria in the third and fourth place playoff game.
“Our dream is to play the Africa Cup of Nations together. We are now looking forward to regrouping as a team and turn our focus to qualifying for Morocco,” Mahachi told supersport.com.
“Personally, I feel I am at my highest level after playing in this tournament and I now need to keep it up when I go to my club.”
Having had a player sent off early in the match, Zimbabwe had to defend for large portions of the game against Nigeria which did not suit Mahachi’s natural attacking game.
“For me it was tough because of that red card. We were defending for almost the whole game, it was hard work, but we did well,” Mahachi continues.
Asked about his future at club level Mahachi said his proposed move to Mamelodi Sundowns will be discussed with his manager back in Zimbabwe.
“I am still hopeful of a move to the PSL to play in South Africa.”Advertisement