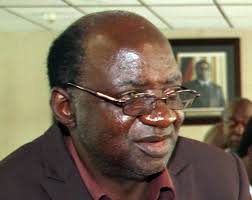 Zimbabwe National Liberation War Veterans Association spokesperson and Zanu PF Harare commissar Douglas Mahiya angered youths who gathered for Crisis Coalition in Zimbabwe meeting in Harare this Friday when he refused to admit he was part of the establishment that brought the economy to its knees and violated fundamental rights.

Mahiya, who was part of the panel of four, distanced himself from the regime of former president Robert Mugabe whose 37 year long reign was ended by a military coup five months ago saying he was nowhere near power when the evils were committed.

“We are not part of what happened. It only happened because we did not have power to stop what was happening. It was not a thing that we expected. All we did was to make available time for the revolution to unfold. Unfortunately the people who were at the helm had all the power,” he said.

“Let me tell you that it is good that you do not associate me with the past dispensation,” said Mahiya to the dismay of the crowd.

He chose to pile blame on Mugabe whom he helped dislodge.

The youths would have none of it and requested that he explains where war veterans, who always remind the citizenry that they liberated Zimbabwe in 1980 after a protracted war and again during the November coup, were during the decades Mugabe plundered Zimbabwe’s fortunes while the masses suffer.

“When somebody is in power my friend, he has everything at his disposal to do you harm, to destroy you or whatever,” he said. Zvauri kutaura izvozvo indava yekuti irikure (what you are saying is because it’s far). If it explodes close to you, you will change language. We know it. That is why we have been quite because the explosives had left from me,” said Mahiya.

After several interjections and confrontations, Mahiya later conceded that power corrupts and urged the youths to fight for what they believe in as well as demand their space in leadership.

The theme for the meeting, which was supported by Friedrich Ebert Stiftung, was celebrating the gains of political independence and setting the tone to execute total political, social and economic freedom.