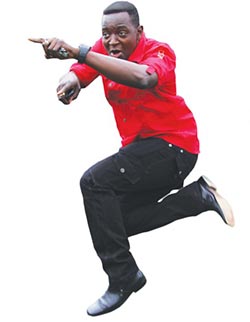 PROMINENT musician Sulumani Chimbetu was Wednesday sentenced to 20 days imprisonment for failing to pay $800 for the upkeep of his two kids with his first wife.
This was after he told court that he was looking for money to survive adding that court’s order was punitive considering that he is not formally employed.
“The complainant said my client is a hustler but it seems as if she is the one who has become a hustler in the maintenance court. My client is even failing to settle his own debts because he doesn’t depend on a salary,” said his lawyer Cornwell Mutebve.
Chimbetu was, however, given an option to pay $100 fine.
Prosecutor Devoted Gwashavanhu Nyagano persuaded the court to give Chimbetu a custodial sentence or community service as it has become his habit to default paying alimony fees.
“He is not a visitor to the court but now a customer. Last time he only paid after he was convicted,” she said.
Passing her sentence, magistrate Anniah Ndiraya said Chimbetu, who was denying the charges, was inconsistent in his evidence.
“He wasted courts time and resources denying the allegations. For him to state that the order does not specify the dates the money was to be paid was to promote lawlessness. He was just being mischievous. Letting him walk away will be an act of applauding wrong doing.
Chimbetu was recently convicted of the same offence and escaped prison after he made a mobile transfer into his ex-wife, Marygold Mutemasango,’s bank account in the court.
Advertisement