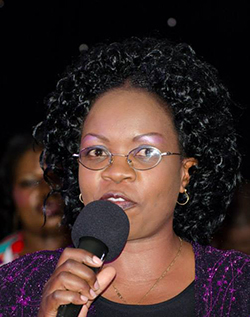 GOSPEL diva Carol Majokoro waded into unfamiliar territory at the weekend as she records her first ever live DVD album at the 7 Arts Theatre.
The 15 track DVD album, titled X-trim Warship 1, was to be produced by Pastor Ted of Shabak Records and features English and Shona praise and worship songs.
“It’s be our first live recording and will feature songs such as Tendai Mwari, Kutenda, We Bless Your Name and come in your presence among others.
“The whole album is all about total worship, thanks giving and praise,” Majokoro told NewZimbabwe.com in an interview in Harare Friday.
Majokoro said the recording would not be an easy task considering the number of songs on the album and that this is only her first time to record live in concert.
This will be the 13th album under her belt and the first in six years, having last recorded the album Champions in 2011, which was well received by her fans.
She said she was not sure of the exact date when the album would be released, but wanted it onto the market as soon as possible.
“It’s been long since we last released an album and I wouldn’t want to delay in releasing this one. All this time we have been playing at events and church services and for us it’s a joy to be coming up with another offering,” she said.
Asked why it had taken her so long to release another album, Majokoro cited financial challenges as well as the menace of piracy, which she said had crippled many a musician in the country.
“I urge people not to buy pirated music because the more they continue to buy it, the more musicians struggle.”
Majokoro said the love for God had inspired the X-trim Worship 1 album, saying it was the first of a series of X-trim albums.
“X-trim worship will be moving with these numbers. We are launching X-trim 1 and the next will be X-trim 2, the next 3 and so on,” she said.
The gospel diva said the album will come in different genres to cater for all music tastes, adding that her group, Sacrifice of Praise, had added more members to make a total band compliment of 18.
Majokoro said they would soon be holding live shows where they will use their music to preach the Gospel of Christ.
“The love of God and the passion for worship is what inspires me. It is a ministry that is within me, so I am a minister of the Word of God through music, I am a pastor.Advertisement

“We are definitely going to be doing a lot of work in terms of live shows and our fans should expect fireworks.”
She said the difficult situation that the country was in demanded that Zimbabweans be united as children of God.