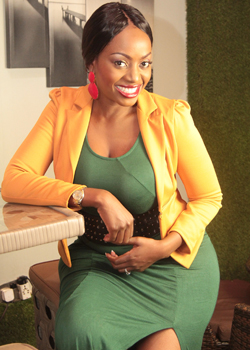 MAKOSI Musambasi is launching her new book in Harare on Friday, October 11.
The Book Cafe will host a book signing for the former Big Brother UK star who is publishing her first book, ‘Self Love: The Ultimate Choice’.
The book was launched in Abuja, Nigeria, on September 23, amid controversy after the 33-year-old’s former publicist took to the internet to claim “the book isn’t hers”.
Nigerian Joy Bewaji claimed she had been engaged by Makosi to ghost-write the book – a common practice employed by celebrities – but the former cardiac nurse had “trashed” the first manuscript she produced.
She claimed: “I wake up… to find out Makosi is the newest author in town. She published the manuscript she had tossed out of the window literally, the manuscript she said I should give to someone else… She published my work without my consent or involvement.”
But Makosi told New Zimbabwe.com Bewaji was a “ghost writer gone bad”.

“She didn’t think I could complete my book without her help. So now she is resorting to blackmail,” said the Zimbabwean.

In a surprise development on Monday, Bewaji circulated a statement retracting her earlier attack on Makosi.
In the statement, she said she had attended a “round-table dialogue” with Makosi “and all misunderstanding and disagreements have been laid to rest”, adding: “As it appears, no one has a horn to their head after all.
“At this point, after proper intervention and mediation, I would like to retract my previous letter as it contains scathing remarks that came straight from a point of utter disbelief.”
Makosi said the 200-page book is full of “motivational nuggets”.

“This book will inspire, direct and redirect many people. I hope it has a positive impact on how we chose to live our lives