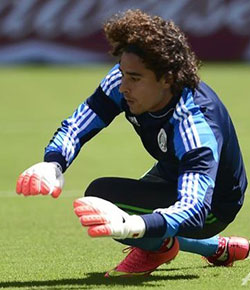 MALAGA have signed Mexico goalkeeper Guillermo Ochoa, who impressed at the World Cup finals, as a replacement for Willy Caballero after the Argentine left to join Manchester City this month.
“Malaga Club de Futbol has reached an agreement to sign one of the best goalkeepers from the recent World Cup in Brazil,” the Qatar-owned club said on their website on Friday.
The 29-year-old had agreed a three-year contract and passed a medical, they added.
Ochoa, who has played for relegated French club AC Ajaccio the past three seasons, particularly caught the eye with his performance against World Cup hosts Brazil in a Group A match in Fortaleza last month.
He produced four world class saves to deny Paulinho, Neymar (twice) and Thiago Silva when they seemed certain to score.
Silva thought he had won the game in the closing minutes with a powerful header only to see his effort parried at point blank range.
Malaga begin their La Liga campaign at home to Athletic Bilbao on August 23.Advertisement