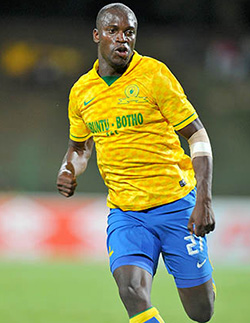 A BRACE from Cuthbert Malajila helped Mamelodi Sundowns to a 2-0 win over AmaZulu at Loftus Versfeld in Pretoria on Sunday afternoon.
Patience paid off for Sundowns, who returned to winning ways thanks to a quick-fire double from Malajila in his first start of the season.
Pitso Mosimane made three changes to the side that suffered a heavy defeat to Orlando Pirates in midweek with the trio that came off the bench against the Buccaneers – Thabo Nthethe, Malajila and Kuda Mahachi – all promoted to the starting XI.
Usuthu, who were further spurred on by their 7-1 loss to Sundowns at the same ground last season, started the stronger of the two sides and rattled the upright in the 23rd minute through Sadate Ouro-Akoriko.
This breathed some life into the Brazilians, who themselves went close through Surprise Moriri two minute later.
The game continued to ebb and flow with Mario Booysen notably flashing his header attempt wide of goal in the 35th minute.
‘Downs finally broke down Usuthu’s resolute defence on the hour mark.
Tebogo Langerman picked out Malajila with a precise cross, the Zimbabwean finding the back of the net with a superb diving header.
Malajila doubled his side’s lead seven minutes later; Moriri this time picking out the energetic front man with a pin-point outside of the boot cross, who headed in from close range.
The Zimbabwean almost grabbed his hat-trick eight minutes from time but somehow sent his effort wide with the goal at his mercy.
The win moves Sundowns up to eighth while AmaZulu remain rock bottom after five rounds of fixtures.
Meanwhile table toppers Kaizer Chiefs stretched their winning run to five matches by beating SuperSport United 2-0 in an Absa Premiership encounter at the FNB Stadium in Soweto on Saturday.
Chiefs turned on the style in the second half and extended their lead at the top of the league table to four points after five fixtures thanks to goals from Mandla Masango and Kingston Nkhatha.
Staurt Baxter resisted any tinkering to his side, naming the same eleven that dispatched Platinum Stars in midweek.
SuperSport United under-19 coach Kaitano Tembo, who took charge of the Tshwane-based team for this weekend’s game following the sacking of Cavin Johnson, made four changes as Matsatsanta aimed to break their two-game losing streak.Advertisement