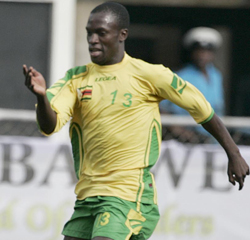 WARRIORS coach Klaus Dieter Pagels has included Cuthbert Malajila in his 25 man squad to face Egypt at the National Sports Stadium next weekend.
The Maritzburg United striker, who is set to complete his move from South African football giants Mamelodi Sundowns, last played for the Warriors under Rahman Gumbo towards the end of last year.
The former Dynamos striker was part of the squad that fell 0-2 to Angola in the decisive 2013 African Cup of Nations qualifiers in Luanda- a result which handed the hosts a ticket to the continental
soccer show piece held in South Africa in January.
And the Zimbabwe Football Association (Zifa), stung by the Warriors’ failure to qualify for the Nations Cup finals for the umpteenth time, responded by dissolving the entire team including the technical department headed by Gumbo.
The national football federation which had been waging a long battle with match fixing following the Asiagate scandal, suspected the match could also have been fixed.
Gumbo was subsequently replaced by German mentor Klaus Dieter Pagels who was tasked to rebuild a team that will qualify for the 2015 African Cup of Nations finals.
But Pagels had overlooked Malajila as he assembled his new look squad.
However, according to the list released by team manager Sharrif Mussa on Thursday, the German coach decided to give him a chance after a decent for his South African club Maritzburg United.
Malajila scored 11 times for Maritzburg United in the just ended season and expectations are high as he seeks to transform his form to the national team.
He revealed he was delighted to be called to the national team.
“It’s the dream of every player to be called to the national team. I am happy that my efforts have been recognised. I have always wanted to give back to my national team,” said Malajila.
Meanwhile, the inclusion of Malajila is the only major change to the squad that played in a 2-1 losing cause in the first leg in Alexandria on March 26.
Chicken Inn defender Felix Chindungwe, Hwange’s Eric Chipeta, Monomotapa’s Nicholas Guyo and Dynamos goalkeeper Artwell Mukandi are the other additions to the squad.
Kaizer Chiefs forward Mathew Rusike and Supersport United striker Simba Sithole who missed the trip to Alexandria owing to injury are also back in the squad.Advertisement