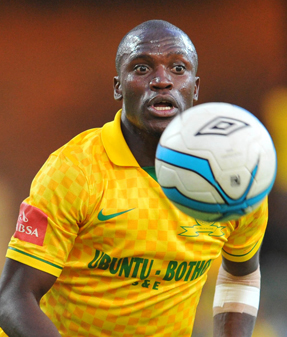 CUTHBERT Malajila netted a brace as Sundowns thrashed Wits 4-2 in an Absa Premiership clash at the Lucas Moripe Stadium on Saturday
However, Wits coach Bidvest Wits coach Gavin Hiunt said Malajila should not have been on the field to score his two goals that handed Sundowns the win.
“We didn’t deserve to lose; we should have won the game clearly,” he said after the match.
“Football is a cruel game sometimes and we didn’t get the rub of the green.
“Cuthbert scored two goals, but to be fair he should have been red-carded in the first half … he should have been off the field.
“All credit to them … they break, they score, but there was only really one team here today and … it’s football for you.”
Sundowns coach Pitso Mosimane said Wits would be in the frame for the title.
“It was a very difficult game against a very good team,” he said.
“They are title contenders and they have a very good coach (Gavin Hunt).
“It’s more of a mental game… And I’ve told my team if they want to win the championship we must win games like this.”
The clash between Mamelodi Sundowns and Bidvest Wits was an early season game of two serious Absa Premiership title contenders.
The Brazilians dominated the opening stages of the encounter, and could have been 1-0 up six minutes into the game.
However, Sundowns midfielder Keegan Dolly’s dangerous curling attempt from outside the box, was well saved by Wits goalkeeper Moeneeb Josephs.
In the 17th minute, Wits winger Daine Klate’s great header was cleared off the line by Sundowns captain Ramahlwe Mphahlele, as the away side began to push forward.
But the Clever Boys were caught napping at the back four minutes later, and Zimbabwean duo Khama Billiat and Cuthbert Malajila combined to punish them.
Billiat played a clever pass to Malajila on the left hand side, and the latter cut inside and fired the ball past a hapless Josephs in Wits goal to break the deadlock.
Wits then took control of the game winning several free-kicks in the Sundowns half and corner-kicks, but the home side were able to protect their slender lead heading into half-time break.
The Clever Boys were just unfortunate not to restore parity after invading the Sundowns box two minutes into the second-half.Advertisement

It was end-to-end stuff, and Klate finally scored for Wits in the 63rd minute, when the 30-year-old midfielder headed the ball into the back of the net from a blind-spot.
However, Sundowns restored their lead through Malajila, who poked the ball into the back of net after a goalmouth scramble in the Wits box 11 minutes before regulation time.
The Brazilians scored two late goals through Billiat and Teko Modise in the 88th and 89th minute respectively. But Klate scored a consolation goal in injury-time.
In the end, Sundowns registered a 4-2 victory against the Clever Boys.