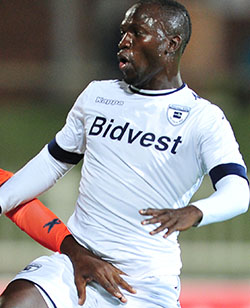 BIDVEST Wits striker Cuthbert Malajila is pleased to be playing in his first ever MTN8 final against former employers Mamelodi Sundowns, just two months after switching loyalties.
The Absa Premiership rivals will contest MTN8 honours on Saturday at Mbombela Stadium (17h00 kick-off).
“As a player, you always aim high, that’s why also I chose Bidvest Wits,” Malajila said at a press conference in midweek.
“In two months, I am playing a final. I never played a final for MTN. Bidvest, they give me the chance to play, and now I am playing a final in two months’ time.
“So as a player you have to be ambitious. You have to know where you’re going, what you want to achieve. So now I’m here, I want to achieve all these things.
“So I have to work hard and give everything to the team,” vowed the Zimbabwean, who is well aware of the threat posed by Hlompho Kekana and company.
Malajila joined Wits from Downs in July along with Mogakalodi Ngele as part of a swap deal that saw Sibusiso Vilakazi go the other way.