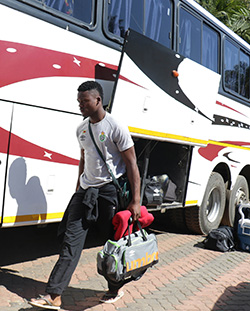 A TIRED Warriors side was expected to arrive in Malawi for their 2017 Africa Cup of Nations qualifier at Friday midnight ahead of Saturday’s match at the Kamuzu Stadium in Blantyre.
The Warriors only left Harare close to 12pm on Friday afternoon, but striker Cuthbert Malajila was keeping his mind focused on the job at hand.
They are understood to have crossed the border into Malawi just around 6pm after arrangements had been made to meet the team there as the border closes an hour earlier.
But they had hiccups along the way as the bus they were using broke down for some minutes before they crossed the Nyamapanda border.
Speaking before departure, Malajila said the last experience against Tanzania was bad and they have to make up for it.
“Remember we drew 2-2 at home against Tanzania and we failed to qualify for the 2015 finals and we have to make up for that,” the Mamelodi Sundowns striker said.
“We know what is expected of us and we will try to do our best there.
“There are no small teams in football these days and Malawi won at the Cosafa Cup and lost 2-1 to Egypt showing that they are a good side and they will be playing in front of their home fans.”

We know what is expected of us … Cuthbert Malajila