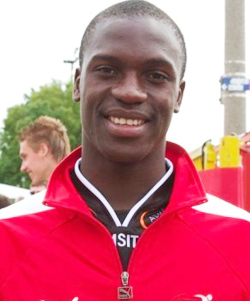 FORMER Dynamos striker Cuthbert Malajila is set to complete a move to Mamelodi Sundown from Maritzburg United this week.

The Zimbabwe international finished the season with 10 goals, including the winner for Maritzburg in a 3-2 victory over Orlando Pirates last Saturday.
His solid contribution for Maritzburg caught the eye of Absa Premier League giants, Sundowns, who had a disappointing season as they finished pegged 10th, one position above Maritzburg.
The South African football magazine Soccer Laduma says the deal is “all but done” for the 29-year-old who began his playing career at Chapungu before stints with Highlanders and Dynamos.
Malajila’s arrival at Sundowns could spell trouble for his compatriot, Nyasha Mushekwi, who was recently offered a 12-month extension to his contract by the Brazilians’ boss, Pitso Mosimane.
Mosimane said Monday that his strike force was the weakest link during the season.
“We will strengthen on our weaknesses, the strike force has let us down this season and we will sign,” he said. “I don’t just sign. I sign the good players that will make a difference at Sundowns.”
“We need to start the new season with a different mentality. Everybody thinks that players at Sundowns are spoilt or whatever, but not with me… that mentality has to change.
“We are going to work very hard and show who we are. We are not spoilt, we are not rich … we are going to earn our money the right way.
“We are going to start doing things right. All the sluggishness and being in a comfort zone is not going to happen with me. I have never been a comfort zone type of guy in my whole career. I have always worked hard… I want everybody around me to do that.”
Sundowns also have the Zimbabwean duo of Esrom Nyandoro and Method Mwanjali on their books, with Lionel Mtizwa also set to rejoin from a loan spell at AmaTuks.
Sundowns have previously shown interest in Ajax Cape Town star Khama Billiat but were put off by their R10 million asking price for the Zimbabwean in January.Advertisement