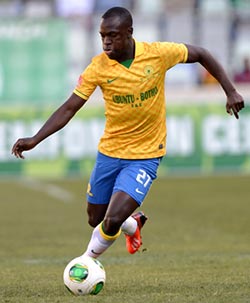 ZIMBABWE international striker Cuthbert Malajila who had fallen down the perking order at Mamelodi Sundowns has switched to BidVest Wits.
The former Dynamos striker joins Wits along with Botswana star Mogakolodi Ngele as part of a deal that sees Sibuziso Vilakazi move in the oppositte direction.
The Warrior says he is happy with the move.
“Am happy to announce I’m now a Bidvest Wits player; can’t wait to join my new team mates [in a] new environment,” Malajila tweeted on Sunday.
The 30-year-old made 54 starts for Sundowns in Premier Soccer League competitions, scoring 20 goals, but fell out of favour last season as ‘CBD’ – Leonardo Castro, Khama Billiat and Keagan Dolly – came to the fore.
Malajila spent three seasons with the team after joining from Maritzburg United.
Ngele failed to establish himself in the first team at Sundowns in his single season with the club where he made just five starts in all domestic competitions, scoring two goals.
The 25-year-old was signed by the club in 2014 but spent the following season back on loan at Platinum Stars.Advertisement