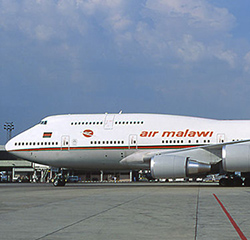 MALAWI Airlines has said it will launch a service connecting the three southern Africa countries of Malawi, Mozambique and Zimbabwe effective November 1.
The airline, which commenced operations early this year, is jointly owned by the Malawian government and Ethiopian Airways on a 51-49 percent basis and was established following the collapse of the state-owned Air Malawi.
Ethiopian Airlines is, however, responsible for the day to day operations of the carrier.
The Malawian government has since announced plans to offload a 31 percent stake in the airline to private investors within one year after the carrier commenced operations.
“Malawian Airlines from 1 November, 2014 is adding service to Mozambique, with two weekly (flights) to Nampula and three to Tete,” the airline said in a statement.
According to the flight schedule, the airline will connect Lilongwe (Malawi), Tete (Mozambique) via Harare (Zimbabwe) back to Lilongwe three times a week.
The airline joins 16 other carries landing at the Harare International Airport and its introduction comes two months after the Royal Dutch airline, KLM announced plans to pullout of the Harare route citing viability reasons.
Zimbabwe is in a bid to entice as many airlines to fly into the country to boost tourism earnings.
At its peak in 1999, the country had 48 airlines landing at Harare International Airport but the majority pulled out for a cocktail of political and economic reasons.
Transport Minister Obert Mpofu recently said government had signed 10 new air service agreements with unnamed airlines in Africa, Europe and Asia to fly into the country.Advertisement