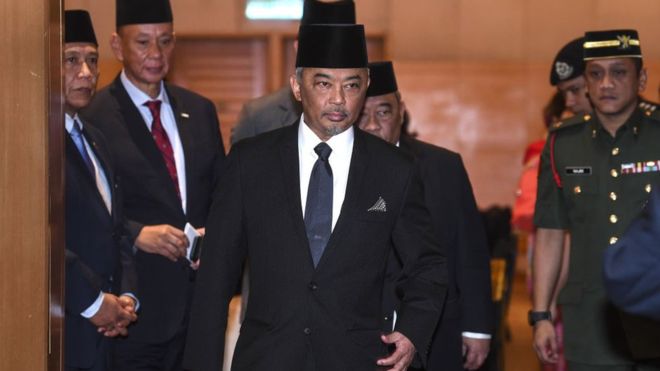 Malaysia has elected Sultan Abdullah of Pahang as its new king after the shock abdication of the previous monarch.
Sultan Muhammad V of Kelantan abdicated in January after just two years on the throne, a first in Malaysian history.
Malaysia has an unusual constitutional monarchy, where the top job rotates between nine hereditary state rulers every five years.

The king, known as the Yang di-Pertuan Agong, is largely ceremonial and does not participate in daily governance.
The Sultan of Pahang – a large state in Peninsular Malaysia – is expected to be sworn into his new role on 31 January.

Sultan Muhammad V, who was 47 when he became king, was known for his enthusiasm for extreme sports like off-road driving, shooting and endurance challenges.

In November last year, he said he was taking medical leave. Later that month, photos began circulating on social media that appeared to show him being married to a former Miss Moscow in the Russian capital.

However no reason has been given for his abdication.

he role of the Yang di-Pertuan Agong dates back to 1957 when the Federation of Malaya declared independence from the British Empire.

The 13 states that make up Malaysia each have a seat on the Conference of Rulers, a council made up of the nine traditional Malay rulers and governors from the four remaining states without a royal family.

Each five years, the nine traditional leaders vote for which of them should next take the throne.