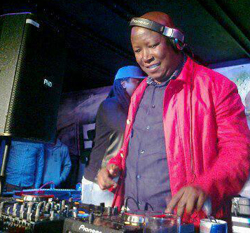 WHILE Julius Malema may have little power left politically, he certainly wielded his weight at the MTN South African Music Awards (Samas) over the weekend.
The former leader of the ANC Youth League made sure that South Africa’s current favourite musician, Dr Malinga, got to perform in the early hours of Friday morning at the Samas’ infamous pre-party, hosted by independent record label Kalawa Jazmee.
The Kalawa party is traditionally one of the biggest parties during the Sama weekend at Sun City in North West. This year the party saw the label’s top artists, including Professor and Mafikizolo, on stage, with an impromptu appearance by Trompies.
By 3.30am the party was still in full swing and fans of the independent record label were demanding more. But the management of the Sun City Shebeen decided it was time to stop the party before Kalawa’s popular new artist, Dr Malinga (of Via Orlando fame), had to perform.
But according to one observer, Malema then jumped on stage.
“Malema grabbed the microphone and said to the white manager: ‘Chief, have you seen a revolution? If you want to see black people revolt, then stop this party.”
He then instructed Kalawa boss Oskido to play the CD and Dr Malinga to do his traditional leap dances on stage. The crowd apparently went ballistic, chanting “Juju! Juju! Juju!”
Co-director of Kalawa, Oskido, played down the incident.

“Julius asked the club owner if Dr Malinga could play. He was very polite,” said Oskido yesterday.
Malema was however just one of the high-profile guests invited to the 19th MTN Samas. Other guests included Generations actors Menzi Ngubane and Sophie Ndaba as well as director Rapulana Seiphemo.
The big winners for the night were Khuli Chana and the granddaughter of IFP leader Mangosuthu Buthelezi, Toya Delazy, with three Samas each.
Khuli Chana won best male and best rap as well as best album. Delazy won best newcomer, best pop as well as best producer for her debut album, Due Drop Deluxe.
The hotly contested best dance award, for which the nominees included Oskido, Vetkuk vs Mahoota, Pascal & Pearce and DJ Pepsi, was won by Black Coffee.
Zebra & Giraffe won best rock while best kwaito was won by Kalawa Jazmee artist, Professor.
Kalawa Jazmee provided a highlight when they ended the show with Vetkuk vs Mahoota. They performed their massive hits Stokvel and Via Orlando. When Dr Malinga kicked his way on stage for Via Orlando the crowd rose to their feet and screamed in excitement.Advertisement

Lira provided a beautiful moment when she performed at the Samas for the first time. Her interactive show included fashion as well as dancers. The Samas were broadcast live on SABC1 with a viewership of five million.