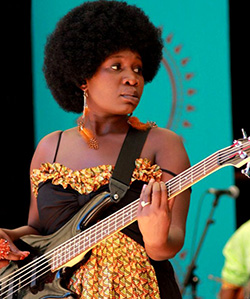 THE phenomenal march of Afrobeats to the foreground of global pop music is hard to miss. With its pulsating energy and groovy rhythms, the genre has achieved staple status on London’s urban music scene and given a new sheen to African music as a whole.
But for most people of African heritage who live in London, the craving for live performances of African music often goes unfulfilled as there are very few options to pick from.
Enter Mama Jumbe’s, a cornucopia of African culture that combines a restaurant serving gourmet African staple dishes and an offering of late night live entertainment and thrilling sets from London’s top DJs.
Nestled in the superbly diverse borough of Newham, Mama Jumbe’s has just carved a niche on the London African music scene. Owner and manager Terrence Jumbe has announced an artists’ residency programme that brings top performing artists to the UK from different parts of Africa.
The eclectic roster of performances kicked off with Brian ‘Buula’ Mugenyi, an accomplished Ugandan saxophonist and singer-songwriter who is based in Nairobi, Kenya. He has just wrapped up his residency at Mama Jumbe’s, but not before dropping in at Ronnie Scotts, London’s world-famous jazz venue, for an impromptu performance.
“We’ve got an exciting line-up over the next few months, and right now at Mama Jumbe’s is Zimbabwe’s edgiest comedian, Q Dube, who’s already taken up residency and will see out the month of October,” Terrence said.