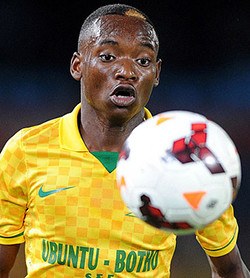 MAMELODI Sundowns midfielder Khama Billiat insists the club will give their all to secure a second-place finish so as to book their place in next season’s CAF Champions League.
The Brazilians’ dream of defending their Premiership crown ended last week when they drew 1-1 with Platinum Stars, allowing Kaizer Chiefs to opened an unassailable lead with a 4-1 win against Polokwane City.
Zimbabwe international Billiat believes playing out too many draws is what cost them their chance to win the league this term.
“I think compared to last season, this season we played too many draws when we should have actually won,” Billiat told Goal.
“I think this saw us fall behind with lots of points to an extent that we couldn’t catch up with Chiefs, but we are professional enough to admit our mistakes, give credit to Chiefs and focus on the next mandate which is to finish second.
“We want to finish second because we feel we exited the CAF Champions League prematurely.
“We learnt a lot from the experience however, but we want to go back immediately whilst the mistakes we made are still fresh in our memory and go back to rectify those.”
There are still four games of the season remaining for Sundowns and, with Pirates and Wits only three points behind them, they need a strong finish to guarantee second.
However, they begin their run in by welcoming newly crowned champions Chiefs to the Lucas Masterpieces Moripe Stadium on Wednesday.
And, Billiat is not expecting an easy game, despite the fact that Chiefs have already won the league.
“To us, we will approach this game as if the league chase is still on because we know what’s at stake,” he added.
“Other than the three points that we need, there’s integrity and pride for our supporters who actually deserve more.
“We have our utmost concentration on this game because we know what is in it for us.”