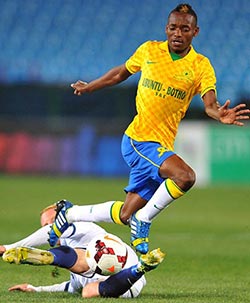 SOUTH Africa: Pitso Mosimane has no doubt Tiyani Mabunda, Themba Zwane and Tebogo Langerman will sign new deals with Mamelodi Sundowns, while he says Khama Billiat’s situation is more complicated.
The quartet are approaching the final six months of their contracts, meaning they can enter negotiations with any team in January.
Coach Mosimane, who confirmed that goalkeeper Kennedy Mweene has extended his stay at Chloorkop, has confidence more of his players will follow suit.
“Mabunda will sign, Themba Zwane will sign, Langerman will sign. When I say they’ll sign I mean they’ll sign, Siyanda Zwane has signed,” said Mosimane after his side went top of the Premiership standings with a 1-0 win over Golden Arrows in KwaMashu on Sunday.
Earlier in the season Mosimane appeared resigned to losing Billiat as the Zimbabwean targets a move overseas.
However, Mosimane has expressed hope that Billiat, who missed the game with Arrows due to a patella injury, may yet commit his future to the ex-African champions.
“Khama’s situation is on the edge and it’s a different one to the rest of the players,” he explained.
“I think Khama will renew in my belief. I think he’ll renew because he knows that we need him. He knows that we love him. He knows that if he’s not going to get a bigger contract somewhere else he must stay here.
“But if he has to get the bigger contract [somewhere] else then okay. You got to understand football is a short career so if you have to get all this money the people promise you, why not but he knows.”
Meanwhile, in-demand Colombian striker Leonardo Castro is yet to make clear his intentions as he stalls on signing a new contract with the Tshwane giants.Advertisement