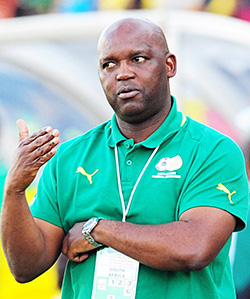 SOUTH Africa’s ABSA Premiership champions Mamelodi Sundowns are set to tour Zimbabwe as they prepare for the forthcoming season.
Former Bafana Bafana coach Pitso Mosimane who won the championship with the Brazilians told the club’s website that they were also planning another tour to Nigeria but were reported to be still battling to finalise a schedule with their intended opponents.
The Brazilians are currently based in Polokwane as they step up their pre-season preparations.
The Brazilians are also considering making a stop-over in the Ivory Coast.
“It’s a 50-50 situation now,” Mosimane told the Sowetan. “We are struggling to get hold of some of the clubs we are supposed to play against.”
Political unrest in Nigeria, where there have been terrorist bomb attacks, is also said to be a concern for the reigning PSL champions.
Zifa communications manager Xolisani Gwesela said they had heard of the intended tour by Mamelodi Sundowns but were yet to receive official communication from SAFA.
“We have heard about the tour but are still waiting for official communication from SAFA,” he said.
Mamelodi Sundowns toured Zimbabwe in January last year for a series of friendly matches against the country’s Big Three – champions Dynamos, Highlanders and Caps United.
The Brazilians technical director Trott Moloto facilitated the tour after coming to Zimbabwe and held meetings with the three  clubs.Advertisement