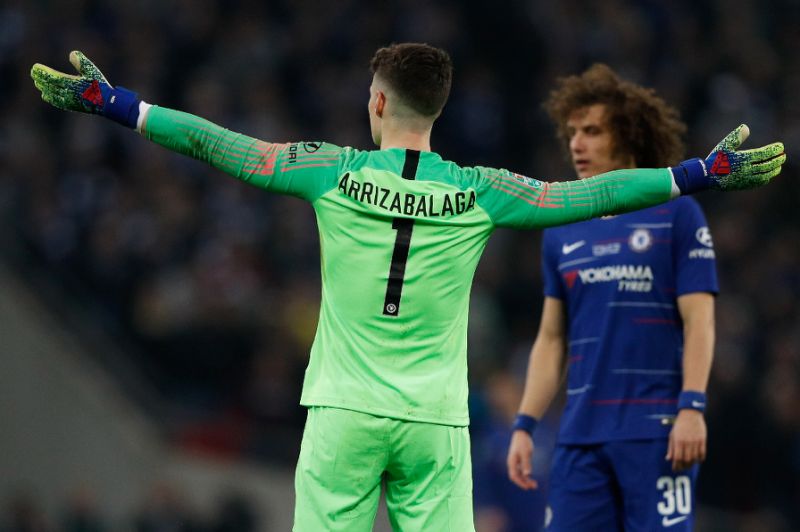 No way! Chelsea goalkeeper Kepa Arrizabalaga refuses to be substituted
Spread This News

Chelsea manager Maurizio Sarri insisted goalkeeper Kepa Arrizabalaga’s refusal to be substituted was a “misunderstanding” even if the Spaniard should have showed more respect towards his boss as Manchester City retained the League Cup on penalties.

The Italian tried to replace the world’s most expensive goalkeeper with Willy Caballero towards the end of a cagey 120 minutes that ended 0-0.

Kepa had received treatment for an injury in the final stages and Sarri said he believed he was suffering from cramp until later informed otherwise by the club doctor.

“It was a big misunderstanding because I understood he had cramp so I didn’t want the goalkeeper to go to penalties in that physical condition,” said Sarri.

“I realised the situation after only three or four minutes when the doctor came to the bench.”

City goalkeeper Ederson denied Jorginho and David Luiz hit the post in the shootout before Raheem Sterling smashed the winning penalty past Kepa.

“The goalkeeper wanted only to let me know that he was in condition to go to the penalties,” added Sarri. “He was right for the motivation but not for the conduct.”

However, Kepa’s show of defiance puts Sarri’s future under the spotlight once more on what had until then been a vindication of his tactics just two weeks on from Chelsea’s worst defeat since 1991 in a 6-0 thrashing at the hands of City in the Premier League.

“I don’t know you have to ask the club,” said Sarri on his future. “Today I am really very happy because my feeling is that we are improving because we could become a very solid team.

“Today we conceded nothing to Man City which is not very easy. They are very dangerous in the offensive phase, they usually score a lot. On the pitch I saw the match that I prepared yesterday, so for a coach it is a very important thing.”

With his back to the wall, it was perhaps understandable then that Sarri adopted a far more cautious approach.

Gonzalo Higuain was dropped to the bench to leave Eden Hazard to plough a lone furrow up front — as the Belgian did when Chelsea beat City 2-0 in December.

“It was quite a similar game to the one in Stamford Bridge where we lost,” said City boss Pep Guardiola.

“What happened two weeks ago is not normal, we knew it.”

However, Guardiola played down suggestions City could now go on to lift a historic quadruple of trophies with the Premier League, Champions League and FA Cup to follow.

“Winning this game is good for the enthusiasm for the next games. But we are going to suffer for the next competitions, especially in the Champions League and Premier League,” added a downbeat Guardiola after losing Aymeric Laporte and Fernandinho to muscle injuries that could rule them out for a few weeks.

Sarri’s game-plan nearly worked perfectly 24 minutes from time when Hazard left Vincent Kompany trailing and crossed for N’Golo Kante, but the French midfielder couldn’t keep his shot under the bar.

Only the finest of margins denied Hazard once more in stoppage time as he raced clear on goal only to see the offside flag go up to Sarri’s dismay.

An extra 30 minutes also failed to muster a goal with City regaining a semblance of control.

Aguero had one final chance to win it three minutes from time, but Kepa made his best save of the game low to his left before refusing to make way for Caballero.

A visibly furious Sarri even started making his way towards the tunnel before turning back to take his place on the touchline.

Kepa did save Leroy Sane’s spot-kick, but should have done better when Aguero’s penalty slipped underneath his body.

Ilkay Gundogan also found the net for City before Sterling sealed the first major silverware of the season by drilling his penalty in off the underside of the bar.