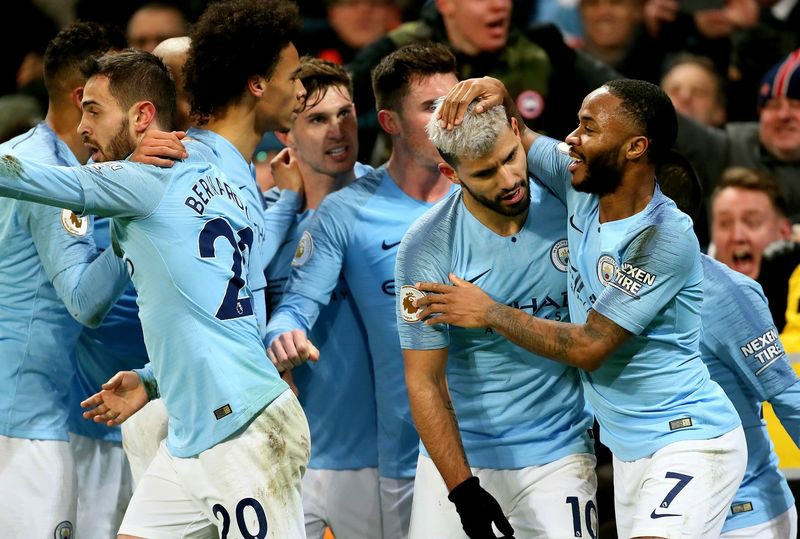 Championes, Championes’ was the chant from the home end as Leroy Sane smashed home the winner on a night when Liverpool were reminded just what they are up against if they are to end this 29-year wait for a league title.

Pep Guardiola’s side still have work to do if they are to claw back a deficit and retain their crown, but this was a night and a performance to savour after a December that has taken more physically and mentally out of the defending champions than anyone had envisaged.

Deprived of one £50m left-back through injury and opting not to start another because of form issues with Danilo and Aymeric Laporte lining up on the flanks instead, the City manager was rewarded for his bravery as every player on the pitch and fan in the stand clubbed together to inflict a first league defeat of the season on a team that had spoken publicly about going the whole campaign unbeaten.

Jurgen Klopp could point to luck and refereeing decisions if he wished. His team were 11mm from taking the lead after 20 minutes when John Stones reacted first to Sadio Mane’s shot coming back off the post only to clear it straight into Ederson’s gloves and send it spinning back towards goal.

Culpable 12 months ago when City lost their unbeaten league record at Anfield, Stones reacted spectacularly and even managed to nutmeg the onrushing Mo Salah as he cleared off the line.

That was a warning that the City defence did not heed, and Vincent Kompany could have seen red for a lunging challenge on the half-hour mark.

But the Blues were due some fortune after the calls they were on the wrong end of in the Champions League last year and – just like City in Europe – Liverpool would be mistaken to blame this defeat on such factors.

With the usual neutral worries about whether such a game could live up to the hype, Sergio Aguero’s opening goal just before half-time was immensely satisfying to anyone not from the red half of Merseyside.

Time seemed to freeze like Alisson on his line as Aguero blasted the ball into the goal from an almost-impossible angle.

Unbroken, Liverpool came out refreshed after the break and their two full-backs combined as Andy Robertson put Trent Alexander-Arnold’s ball on a plate for Roberto Firmino to score from close range.
City, though, responded like champions. They waited for their chance and an otherwise quiet Raheem Sterling timed his ball perfectly for teammate Sane to find the far corner.

With immense performances off the ball from Ederson all the way through to Aguero, the home team survived a nervy finale to hold out for victory.

Nobody yet knows the significance of this three points, but as Liverpool mull the end of their unbeaten record they will be in no doubt as to the quality of the team chasing their top spot.