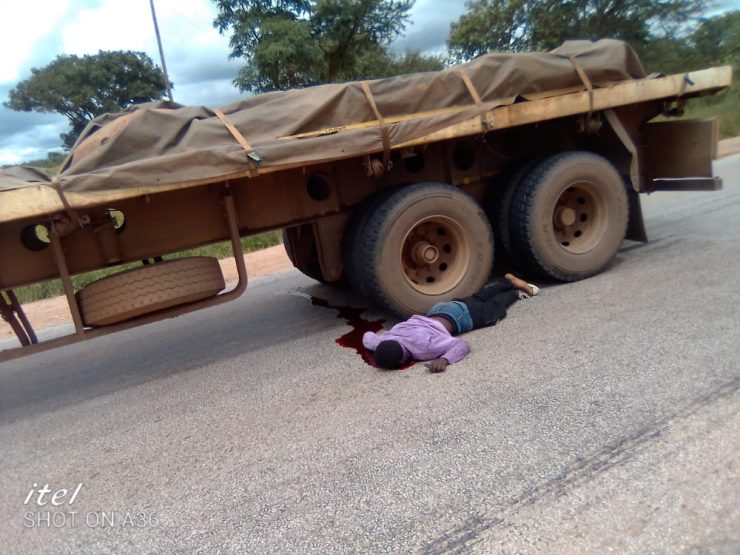 Jameson Talent lying in a pool of blood
Spread This News

A KAROI man decided to end his life tragically Thursday after diving into the wheels of a trailer which was being towed by a moving haulage truck.

The now deceased was identified as Jameson Talent (23) of Village 1, Kasimure, Karoi.

“As the ZRP (Zimbabwe Republic Police), we would like to confirm a fatal road traffic accident which occurred at the 168-kilometre peg along the Harare-Chirundu road at around 10:00hrs, whereby 23-year-old Jameson Talent dived into the rear wheels of a haulage truck’s second trailer and was hit and died on the spot,” said Mahonde.

The truck was loaded with 34 tonnes of copper.

Upon reaching the 168km-peg along Harare- Chirundu road, Talent who was standing by the roadside dived and bumped onto the rear wheels of the second trailer.

He died on the spot after sustaining severe head injuries.

The fatal accident happened in view of two witnesses, Francis Simango and Elijah Stemma of Village 2 Kasimure, Karoi, who were also standing by the roadside hiking to Chinhoyi.

The matter was reported to ZRP Karoi Traffic who attended the scene. The deceased’s body was conveyed to Karoi District Hospital for post mortem.

Jere left a suicide note indicating he took his own life because of mounting debts.

In the same note, he asked his family to forgive him for the decision and apologised to his landlord for causing him too much suffering by not paying rentals.

Jere indicated the sole reason for taking his life was due to overwhelming debts which were beyond his capacity to repay.

“We are investigating a case of sudden death which occurred on Tuesday in Waterford. The now deceased Collin Jere was an employee at TV Sales Home. Circumstances are that on February 9, Jere was with his wife aged 39 at their home at Waterford when Jere went out of the house to get fresh air,” Ncube said.

He added Jere’s wife later made a report to police after he did not return home, and a search was made to no avail. He was found by a passerby Wednesday hanging from a tree in the neighbourhood with an armored cable around his neck.

A report was made to the police who attended the scene and found a suicidal note which read; “I regret doing this but I am overwhelmed with debts which are beyond me. I have caused unexplainable pain to my wife, kids and relatives. I have sunk beyond retrieval, for everybody who is going to be affected by this, my sincere sorry. I am too weak to handle the pressure. I have caused too much pain to my landlord. I am out C. JERE,’’ reads the letter.

Ncube said Jere’s body was taken to United Bulawayo Hospitals for a postmortem.