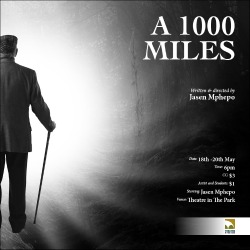 AWARD WINNING actor, director and producer, Jasen Mphepo, has set a date with Theatre in The Park for his one man show A Thousand Mile.
Set to run from May 18 to 20, the play takes the audiences through a journey of inspiring and intriguing stories.
The one man play provokes debate surrounding life’s challenges and successes and is a combination of comedy and physical theatre. It is an intriguing and captivating one man act about real life, secrets, life journeys, success, freedom, failures and happiness.
Bernard Mabhena (Jasen Mphepo) lived a full life and, at 65, is still strong and waking up every morning to go to work and look after his family.
He still spotted that jovial smile that everyone admires and which soothed many a heart.
Then one day people gather at his funeral to celebrate a life worth lived. Everyone who was related to him and those who knew him are there to pay their last respects.
It so happens that before his judgment in Heaven, he asks to have a glimpse of what his funeral would be like. Bernard watches different people gathering to bid him farewell.
He is amazed at the things people say about him, how people celebrate his life, how some are hurt he is gone and how some rejoice at his passing on.
Bernard gets an opportunity to see through the thoughts of people at the funeral; he gets to hear different people’s plots and plans.
He, however, is not in control of these actions and cannot do anything to control them.
Mpepho said he decided to take his play to Theatre in the Park’s new stage because he believes the venue is a prime spot with the right audiences for mainstream theatre making his production a suitable show.
“Audiences should expect laughter and more laughter, as well as participating in the play as performers themselves. In-fact I am expecting the audiences reactions and participation during the performance as only that can raise my adrenalin and I will try to give them the best of Jasen Mphepo.”
A Thousand Miles story telling is aided by visual, music, song and dance. As the lights go off, a spot light focuses on Bernard accompanied by the famous gong sound track synonymous with death scenarios.
The play combines the use of theatre and film to tell the story of Bernard’s past and present life experiences. The play uses a mix of physical theatre as there is minimalistic property on stage to play with whilst comedy is dotted throughout the play.Advertisement

Bernard will play several roles as he illustrates the narration. At the end of the play a projected video shows how he died.