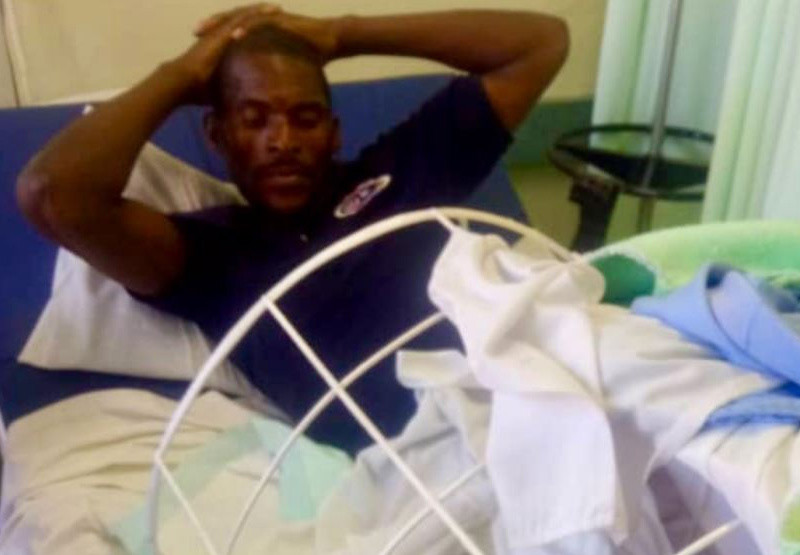 A 39-year-old man, Kenneth Tachiona, who was shot and seriously injured by a Chinese while he was demanding payment of his salary in United States dollars, says he wants to be compensated as he is now disabled.

In an exclusive interview with VOA Studio 7, Tachiona said his family will struggle to survive if he does not get any compensation.

He was allegedly shot in both legs by Zhang Xuelin, a 41 year-old Chinese man, following a pay dispute at a gold mine on the outskirts of Gweru on June 21st.

Zhang has since been charged with attempted murder and is currently in remand prison. Tachiona, a general hand at the mine since 2015, was among several other workers who confronted Zhang, demanding to be paid their wages in US dollars instead of the local currency, which the boss had reportedly initially promised them.

Speaking to VOA Zimbabwe from his hospital bed at a private hospital in Gweru, Tachiona said he remembers clearly the events of the day prior to his alleged shooting, but says everything else became blurred immediately after he was shot.

Tachiona said there was nothing that he did to warrant what he describes as brutal treatment by the Chinese man.

“There is nothing that I did wrong. We were conversing and he said since I was one of the longest serving workers I should convince others to go back to work. When I told him that I couldn’t do that since the other workers were there to speak for themselves, that’s when he told me I was fired. We exchanged some words and the next thing I remember is hearing gunshots and pain in my legs,” Tachiona said.

Besides the pain, Tachiona said his most immediate concern is that he has become disabled.

His doctor has told him that he will most probably never be able to use his legs normally again. Tachiona has five children, the eldest in Form Two and the youngest in Grade Three. Before the alleged shooting, Tachiona was a healthy, able-bodied man, who could fend for his wife and children but he will no longer be able to look after them.

“Of course I want the law to take its course but I’m now disabled and for me, the most important thing is to be compensated adequately. I’d be happy if he gets jailed for this crime but my biggest concern is that I should be paid enough money to enable me to take care of my family for the rest of my life since I won’t be able to work anymore.”

There have been reports that Zhang’s colleagues have paid some money to Tachiona’s family as restitution but VOA could not immediately ascertain this.

The Zimbabwe government counts China among its closest allies but there have been many complaints from locals over how Chinese nationals who own companies in the country, ill-treat their workers.

The Chinese Embassy was quick to issue a statement saying it was concerned about the reported incident, which it described as isolated, adding that it hoped it would not soil the strong ties between the two countries.

On his part, President Emmerson Mnangagwa has already said that the matter will be handled fairly.
The Chinese national will next appear in court on July 7th.