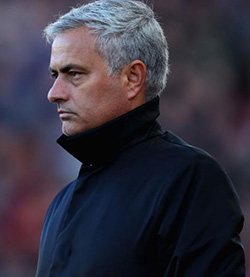 THE absence of key midfielders due to injury will have no impact on the Manchester United team’s quality in their Champions League match against CSKA Moscow, manager Jose Mourinho said.
United will be without Paul Pogba, Marouane Fellaini and Michael Carrick, leaving Mourinho with Nemanja Matic and Ander Herrera as the only experienced central midfielders available for the game on Wednesday.
“We don’t have Fellaini, we don’t have Pogba, we don’t have Carrick. So all three midfield players we lose for this match. The solutions are not many,” Mourinho told a news conference on Tuesday.
“We try not to focus on individual battles or specific areas on the pitch. We try to focus on the bigger picture. And we are going to have a team with quality, with balance.”
Mourinho expects Fellaini to be back soon after sustaining an ankle injury in the 1-0 win at Southampton on Saturday.
“It was only when I saw it on TV that I realised that Fellaini was very lucky,” Mourinho added. “I do not expect him to be out for long.”
CSKA Moscow lie fourth in the Russian Premier League with six wins from 11 games but Mourinho believes they are “the best CSKA I am going to play against”.
“I don’t like to speak about opponents,” he said.
“If I speak good, I motivate them. If I speak bad, I motivate them.”
United, unbeaten this season and level on points with Manchester City at the top of the Premier League, started their Champions League campaign with a 3-0 win over Basle at Old Trafford.
CSKA beat Benfica 2-1 in Lisbon in their opening match.Advertisement