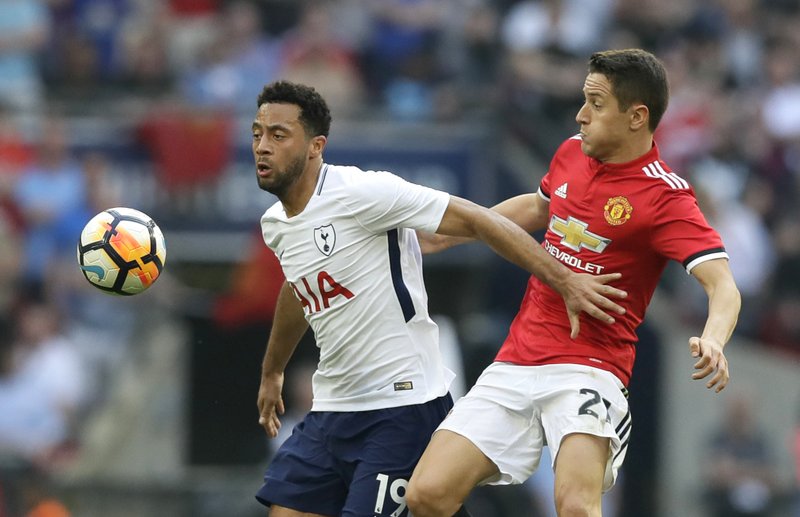 While Mauricio Pochettino wins admiration for his style of football, the manager has yet to actually win a trophy in management.

A 2-1 collapse to United at Wembley Stadium on Saturday left Tottenham reeling from an eighth successive loss in the FA Cup semifinals.

Pochettino is responsible for two of the setbacks, having also fallen short against Chelsea last season, plus lost the League Cup final in 2015.

“We can’t keep doing this,” Tottenham midfielder Dele Alli said. “We can’t throw it away. We have got to improve.”

But Alexis Sanchez leveled in the 24th minute and Ander Herrera struck the winner in the second half. It ensured Mourinho, who won the League Cup and Europa League in his first season at United, has a chance to also end this campaign with silverware against Chelsea or Southampton in the FA Cup final.

“We’re getting used to being in finals,” Herrera said. “This club is all about titles and finals.”

While Mourinho has fallen short in the English Premier League behind newly crowned champion Manchester City, United is second and on course for its highest finish since Alex Ferguson retired in 2013.

Tottenham would settle with holding onto fourth place to secure a third season in a row in the Champions League. That ensures Tottenham lands another UEFA windfall, but not the prestige of being title winners.

Despite failing to win trophies at Tottenham or in previous jobs at Southampton and Espanyol, the Argentine coach is still linked to leading jobs in the game after four years at Tottenham.

How much longer will he resist advances from clubs who offer a greater prospect of glory? After voicing his “disappointment and frustration,” Pochettino talked of a future without him managing Tottenham.

“With me or another coaching staff the club needs to push on,” Pochettino told beIN Sports television, “to reach the same level as the clubs like Manchester United and Manchester City. But a long way still to work to try to arrive at this next level.”

Liverpool missed a chance to considerably stretch its advantage over Tottenham in one of Saturday’s two league games. Juergen Klopp’s side threw away a two-goal lead to draw with last-place West Bromwich Albion 2-2 and move only three points ahead of Tottenham.

Chelsea, which plays Southampton in the other FA Cup semifinal on Sunday, is five points behind Tottenham with four games remaining.

When United fell behind to Tottenham, Paul Pogba was culpable.

When a high ball was launched forward by Tottenham, a lethargic Pogba didn’t try to break sweat in an attempt to prevent it reaching Eriksen. It allowed the Dane to whip in a cross for Alli to slide onto at the far post and strike past David De Gea in 11th minute

Had Harry Kane made a connection at the far post with Son Heung-min’s cross three minutes later, Tottenham might have extended its lead.

Instead, United was able to draw level. Pogba made amends for his earlier inertia by dispossessing Mousa Dembele and delivering a cross that Sanchez headed past static goalkeeper Michel Vorm.

Sanchez did the hard work to create the winner in the 62nd, holding off Kieran Trippier and rolling the ball into the penalty area where Jesse Lingard teed up Herrera to shoot past Vorm.