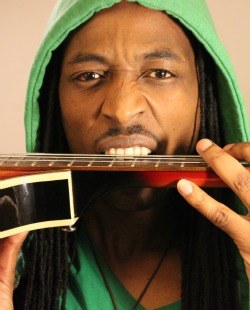 WITH dreadlocked hair flowing from underneath a stylish cap perched snugly on his creative head, bass guitar slung across his waist, Aaron Manatsa cuts the figure of a man who could not have been anywhere else even if he had tried, like the biblical prophet Jonah, to evade his calling. It was only ever going to end one way: with him wielding that bass guitar, bleeding it of whatever sweet melodies it concealed within its electrified veins.
Aaron is the son of Zimbabwean music royalty, a chip off the legendary musical block that is Zex Manatsa. Launching the original Green Arrows in 1968, the older Manatsa went on to dominate Zimbabwean music throughout the 70’s and 80’s and, through his sons, is now the proud patriarch of one of the country’s best known musical dynasties. Like his five brothers, Aaron was raised on a diet of music and was a proficient player of multiple musical instruments by the time he was a teenager.
Preferring the bass guitar, like his father before him, Aaron’s music is a fusion of Southern African jazz and traditional sounds woven with contemporary indie, rock and pop to create a fresh vibe hung on an uplifting humanitarian message.
As the New Green Arrows prepare to launch at Luton Library Theatre on Saturday May 25, we caught up with Aaron Manatsa to sound him out on his music.
Correspondent: Are you signed to any record label, whether in UK or elsewhere, or do you work currently as an underground band?
Manatsa: We are currently soldiering on as a stand alone band under our own boot-strapped label, Manatsa Music. We hope, in time, to build and strengthen this brand into an established household name. For now, we are simply creating material in my home studio. Over the years, I have worked on numerous projects commissioned by record labels. In my opinion, most of the deals have been bad for the artist. Moreover, I have learnt a lot from my father’s experiences.
One of the most unfair things to blight his career was the injustice of the record label deals that he got tied down into during his days. My dad dominated the 70’s and the 80’s with one hit record after another. But the returns on the deals with the record labels, sometimes, were as low as only 12%. The rest went to the record labels. Furthermore, they would also own his master tapes. Now, tell me if this sounds fair? Surely not!Advertisement

Working with record labels allows you to march forward and produce good quality material over night as they provide you with capital, resources, marketing and distribution connections, which would take an individual a bit of time to build on their own. But in the long run, most record labels leave you with nothing for yourself. Having said that, and provided the deal is fair, I have no problem working with established record labels.

Correspondent: Are you working on a debut album and if so, when do you plan to release it?
Manatsa: Being a producer, singer and songwriter lands me and my band in a place where material is not a problem. We have a lot of material that is just demo recorded and shelved in my home studio. Boot-strapping and funding ourselves means that we really have to pace ourselves in material production. We don’t want to ‘bite too big a chunk than we can chew’. We are talking 2014 for our first album as the new Green Arrows Band. Between now and then, we have just released a single entitled ‘Get up and go’ (http://www.youtube.com/watch?v=nuB_J8TwqiA). This is just a simple message regarding the struggles in life that bring us down at times. One has to get up and go, ‘UCHIVHUNDUTSIRA’, ‘KUTI ZVITYISE’. We also have two other hot singles on the way.
(Zvinhu zvese ndezvamwari: http://www.youtube.com/watch?v=dO_WVeT9DW8).
Correspondent: Who is your target audience? Does being based in the UK influence your thinking about which audiences to appeal to?
Manatsa: We carry a humanitarian message with an aim to inspire and entertain through ‘One love’ for a better world. This puts us in a position where we want to appeal to as many people as possible. Being based in the UK has exposed us to what happens when our fellow Zimbabwean musicians fly over for gigs and festivals. The music melody is outstanding, but the message faces a barrier because not everyone speaks our wonderful Shona and Ndebele languages. For this reason, we have learnt that if we are to get the message across to a wider audience, we need to include some common languages in our music. My dad did the very same thing back in the day. He sang in Shona, Ndebele, Nyanja and even English. I would do the same thing even if I was not based in the UK. It just makes good sense from a strategic point of view.

Correspondent: With the West African-dominated Afrobeat sound blazing a trail into the mainstream western fan base and getting wider market acceptance, are you under any temptation to conform your sound and also ride that potentially lucrative wave, or are you sticking to your guns and seeking recognition purely on your own originality?
Manatsa: I am one of those people who are very content and happy with their identity. And I will answer your question just as you’ve put it: sticking to my guns and seeking recognition purely on my own originality. I try to learn principles of success from other people’s experiences but try to remain me. This gives me a unique selling point. And once again, my father got his success from being himself and simply creating a fusion of his own sound. That way, no one can touch you. I respect what the West-Africans are doing. I love their beats and the market is indeed tempting. But going down that road means that I will always be compared against them. Creating my own sound on the other hand, provides me with so much space that the sky is the limit.
Correspondent: You performed at this year’s Zimbabwe Achievers Awards before a full house of Zimbabweans; how was that experience for you?
Manatsa: Performing before Zimbabweans is always a top dollar experience. I love my Zim audience; they are our key and primary audience and understand where we are coming from better than any other. I certainly look forward to future Zim audience performances.

Correspondent: What is your performance schedule like, and where do you play?
Manatsa: We have just launched gigs in Bedfordshire for the year. Folks will be able to see what we are up to through visiting our group (New Green Arrows Band) on Facebook or our website (www.manatsamusic.com).

Correspondent: Are we likely to hear of your exploits at live venues back home in Zimbabwe any time soon?
Manatsa: As mentioned earlier, when one funds and produces material for oneself, it is neither easy nor good to ‘bite too big a chunk before they can chew’. With time we hope to do so, but I won’t promise that it will be within the next few months. I visit home regularly; in fact, I was home over Christmas. And when I am home, I run with whatever the family is working on at the time. For now, the guys have been working on building the Selmor Mtukudzi music brand. I laid down some male backing vocals on some of the tracks on Selmor’s latest hot-selling album ‘Expressions’, which was produced by another one of my younger brothers Freedom (who also played drums). We are trying to clearly streamline and avoid any brand confusion in as far as the huge family gifts are concerned. So, yes, we will be doing some live stuff in Zimbabwe some time in the medium to long term. For now, we are sticking to audio and video material for Zimbabwe.

Correspondent: Your brother Tendai has been busy raising the Manatsa musical flag at home in Zimbabwe. And now that you’ve lit the beacon here as well, are we likely to see a Manatsa family musical reunion on stage on these shores?
Manatsa: (Chuckling) I like that – the flag and the beacon! But once again, as a broken record, we do not want to ‘bite too big a chunk and fail to either chew or swallow’. I’m very proud of my brother Tendai. He has certainly raised the Manatsa music flag for the family. My dad is also a very proud man. Tendai and I have always discussed issues regarding international gigs and have agreed that we will do stuff at the right time. For now we are concentrating on getting Selmor out into the international market. She has already received a good deal with a record company in South Africa. Gigs on these shores need to be done properly. We hate the kind of gigs we have seen here in the past where artists have come over and venues are not proper, P.A systems are dodgy, with the audience ultimately disappointed with the gig. We will be working on this in future, and when we do, I promise you that we will not let our fans down.

Correspondent: Lastly, what can we expect from The New Green Arrows in the next few years?
Manatsa: Watch this space! I like the principle of letting results speak for themselves. Music is a long game. It’s not something that is done or built overnight. Tuku only went up the charts in the 90’s, yet he started his music career much earlier. In other words, the New Green Arrows are here to stay and make music that will stay with you for life. One love!