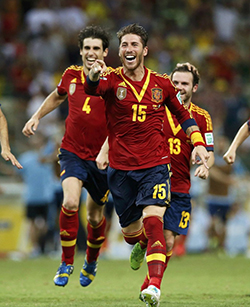 MANUEL Pellegrini has warned his Manchester City stars to keep their eyes on the prize as they aim to secure a Champions League place at the expense of Manchester United, while champions Leicester will bring down the curtain on their astonishing season at Chelsea on Sunday.
With a memorable Premier League campaign coming to a conclusion with the final round of fixtures this weekend, the focus is split between the Manchester rivals’ battle for the last spot in Europe’s elite club competition and a fitting finale for Leicester as the fairytale champions bow out at the home of last year’s winners.
For City manager Pellegrini, his side’s trip to Swansea offers an opportunity to leave on a high note as the Chilean prepares to clear his desk ahead of the arrival of Pep Guardiola, who moves to Eastlands from Bayern Munich in the close-season.
Fourth placed City are two points clear of United and, with their goal difference at +30 compared to their fifth placed rivals’ +12, Pellegrini’s side need only to draw in south Wales to qualify for the Champions League and consign their neighbours to the drudgery of the Europa League.
But Pellegrini knows a complacent attitude from his team could lead to a calamity at the Liberty Stadium.
“This Premier League is not easy. Swansea are a difficult team when you play away,” he said.
“They have done well in the last two games. We must play a very good game to qualify.
“If we play the way we did against Arsenal (last weekend) and we win, it will be a good finish.”
United’s 3-2 defeat at West Ham in midweek took their European fate out of their hands and they host Bournemouth knowing only a victory, combined with a City defeat at Swansea, will be enough to snatch a top four finish.
Despite the unpromising situation, United midfielder Michael Carrick, whose side face Crystal Palace in the FA Cup final on May 21, urged his teammates not to coast through the Bournemouth game.
LAST HURRAH
“We have to stay focused, that’s the situation that has presented itself now,” Carrick said.
“We were in control of it going into the West Ham game but we’ve let it slip. We have to win our last league game now and then see what happens.”
Just 10 months after being installed as 5 000-1 outsiders for the title, Leicester bid farewell to the most remarkable season in the club’s 132-year history with a trip to Stamford Bridge to face Chelsea.Advertisement

It is an appropriate last hurrah for Claudio Ranieri’s side because the team-spirit and desire that played such a significant role in their title triumph stands in marked contrast to the lethargic efforts of Chelsea’s sullen superstars.
While Eden Hazard, Diego Costa and company showed little commitment to the cause in a desultory title defence, the likes of N’Golo Kante and Jamie Vardy rose from obscurity to reach the pinnacle of the English game.
Leicester midfielder Kante, a £5.6 million ($8 million, 7.1 million euros) signing from Caen, summed up that never-say-die spirit with more tackles and interceptions than other Premier League player this season.
“I am not a star player,” Kante said. “I think it was the spirit of the team.
“When I came here I could not imagine this, winning the title. But we fight all the time and this is why we have done it.”
Despite missing out on a first top-flight title for 55 years, Tottenham would have the consolation of finishing above north London rivals Arsenal for the first time since 1994-95 if they take a first runners-up berth since 1963.
Mauricio Pochettino’s second placed side are two points ahead of Arsenal with a far superior goal difference, meaning a draw or win at Newcastle would make it irrelevant how the third placed Gunners fare in their home fixture against bottom club Aston Villa.
“Finishing third would be hard to stomach,” Tottenham striker Harry Kane said.
“It would be good for the fans to have the bragging rights for the first time in a long time. It’s in our hands.”
West Ham, Southampton and Liverpool are all in contention for Europa League spots, although qualification may not be decided until after the FA Cup final.