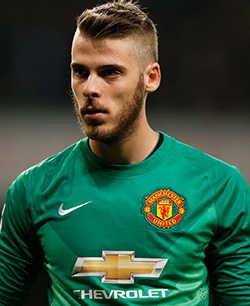 MANCHESTER United manager Louis van Gaal urged his players to keep their cool against fierce rivals Liverpool on Sunday as he dampened down suggestions goalkeeper David de Gea would move to Real Madrid this month.
The fixture between the two North-West giants is always one of the high points of the Premier League season and has seen more than it’s fair share of red cards over the years, with former United defender Nemanja Vidic managing to collect four himself in a six-year spell.
Despite neither side being in the hunt for the title at present, Sunday’s match at Anfield is likely to be a fiery affair with Van Gaal in need of a win to keep the pressure off his position and to maintain a challenge for a top-four finish.
A victory for Liverpool manager Jurgen Klopp in his first game against United, meanwhile, would further endear him to the Reds’ supporters.
Nevertheless, Van Gaal will warn his team to avoid the kind of emotion that saw Liverpool great Steven Gerrard sent off less than a minute after coming on as a substitute in his final appearance in the fixture last March.
Van Gaal, acknowledging this is the biggest game on the calendar for United, said Friday: “That’s how the fans are seeing that and I feel it also.
“You can see it at the faces of the players. Last season for example, Gerrard is on and sent off within 30 seconds. We need to be aggressive, but also under control in these kind of matches. But that is always difficult, because the passion to play these kind of games is always high.”
‘CAPABLE KLOPP’
Van Gaal has enjoyed three successive wins over Liverpool since taking charge of United in 2014, including a 3-1 victory at Old Trafford in September.
Another victory would stall talk of a possible change of manager at Old Trafford following a run of just one win in eight games but the Dutchman knows he faces a serious test in his first Premier League meeting with Klopp.
The pair shared two wins apiece when they were rival managers in Germany – at Bayern Munich and Borussia Dortmund – and the United boss has been impressed with Klopp’s start in English football since his arrival on Merseyside in October.
“You can see his (Klopp’s) hand and that is very important to see somebody’s hand when he is the manager. You can see a very aggressive and pressing kind of play in Liverpool’s game,” Van Gaal explained.Advertisement

“Of course, he has to learn also the Premier League, the rhythm of the Premier League, and I think he knows already the difference between the Premier League and German league.
“But he is very capable to be a manager in the Premier League because he has always played this kind of football and I think the fans shall love it.”
United’s supporters enjoyed their side’s more positive attacking display as they drew 3-3 at Newcastle United on Tuesday.
But for Van Gaal it was a case of a missed opportunity after his side, widely criticised for their lack of goals this season, twice surrendered the lead.
“I think I was more disappointed than the fans. On the streets I have had a lot of support but then I say to them we lost two points and two points is very important in this period because we have to win points.”
De Gea’s proposed move to Madrid collapsed on deadline day in the last transfer window but there are suggestions the Spanish giants may renew their interest this month.
That is after they were hit by a Fifa ban from registering players over the next two windows after breaching regulations in the signing of young players.
“I don’t know, because I don’t think that kind of thing plays in the mind of David de Gea. I have never thought that,” said Van Gaal.
“Now I am seeing a De Gea who is enjoying to stay here at Manchester United and play good games.”