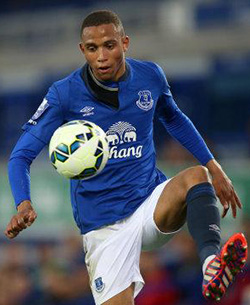 ZIMBABWE born Everton defender Brendan Galloway has attracted interest from English football giants Manchester United who are looking to sign him ahead of the January transfer window.
According to British press reports Galloway is being earmarked as a direct replacement for injured left back Luke Shaw.
The 19-year-old defender, signed a five-year deal with Everton when he moved from MK Dons in the summer of 2014 and has started seven of Everton’s Premier League fixtures thus far.
And without Shaw, the Daily Mirror reports that United manager Louis van Gaal will try to poach Galloway both as cover and as a long-term prospect in the January transfer window.
Following Everton’s 1-1 draw against Liverpool in their Premiership match, Toffees manager Roberto Martinez heaped praise on the starlet.
“Brendan Galloway is still a teenager but is someone that brings a smile to your face when he gets on the ball and then the partnership between Ramiro Funes Mori and Phil Jagielka looked like they had been playing together for years,” Matinez told the team’s website.
BBC Sport’s Phil McNulty was also impressed and tweeted after the Merseyside derby: “Brendan Galloway looks a class act and quality in the making.”
Galloway, who moved to England with his family when he was six, made his debut for the Merseyside club in a 2-1 away win against West Ham in May this year and his stoke has continued to rise since then.
Martinez said recently Galloway would be given improved terms after his excellent start to the season.
The teenager has represented England at youth level which means he is still eligible to play for Zimbabwe.
However, the Zimbabwe football authorities have not made a concrete decision to lure him to play for the Warriors.Advertisement