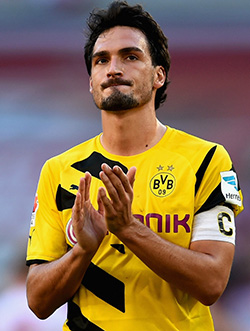 MANCHESTER United have tabled a €30-million bid for Borussia Dortmund’s Germany defender Mats Hummels, according to a report in Sport Bild.
Hummels admitted earlier this month he was weighing up his options amid reports United boss Louis van Gaal wants Dortmund’s World Cup winner at the heart of his defence for next season.
After Dortmund coach Jurgen Klopp announced last Wednesday that he would leave at the end of the season, Hummels is set to be the next big name star to leave the 2013 Champions League finalists, according to the magazine.
German daily Bild claim United’s offer is too low for Borussia, but Dortmund could be persuaded to part with their captain for €40 million.
Hummels joined Dortmund from rivals Bayern Munich in 2007 on a loan deal before Borussia paid €4.2 million for him two years later.
The 26-year-old was part of the Dortmund squad which won the 2011 and 2012 German league titles before finishing runners-up to Bayern for the last two years, and was first-choice during the World Cup campaign scoring two goals for Germany at Brazil 2014.
Advertisement