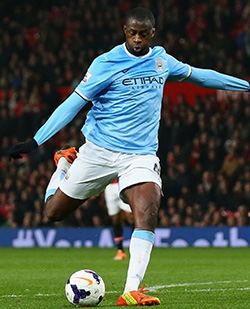 FORMER Manchester City boss Roberto Mancini has expressed an interest in signing midfielder Yaya Toure for his current club Inter Milan.
Toure was hugely influential for Mancini’s side during the Italian’s spell in charge at the Etihad Stadium from 2009-13.
Ivory Coast international Toure won the FA Cup and the Barclays Premier League under Mancini after joining the club for £24million from Barcelona in 2010.
Mancini has remained an admirer of the 31-year-old and, now in charge at Inter for a second spell, would welcome him to the San Siro if available.
“Yaya is one of the strongest players in the world,” Mancini told Italian newspaper Il Giornale. “He still is.
“He has played in so many teams. He has been in leagues in Belgium, Russia, Spain and England. Italy is the one missing.
“This could be the right opportunity for him to come and try. We are building a team. There are players that change the look of a team, and Yaya is one of them.
“Next year we could try. We need to bring three champions, and we will see that we will be ready to fight for the Scudetto.”

Mancini was sacked by City after defeat in the 2013 FA Cup final and does not feel his departure was handled particularly well.
City were criticised at the time and a statement that expressed a desire to develop a “holistic approach” attracted ridicule.
Mancini told Sky Sports News: “They didn’t understand what they said. They said everything without sense, but this is not important.
“It is important that I built this team, the team that plays now and plays fantastic football is a team that I built.
“In the last two years they added other important players but for me it is important that I did a good job there.”
Mancini remains proud of his achievements at City, having helped the club end a 35-year trophy drought by winning the 2011 FA Cup and then following up with first league title in 44 years.
City regained the Premier League crown under Manuel Pellegrini last season and are in contention again this season.
Mancini said: “I am very proud of what I did at the club.
“We changed the mentality. We won the league, the FA Cup – now they play with the same team. The important players are the same – Yaya, (David) Silva, (Samir) Nasri, (Pablo) Zabaleta, (Vincent) Kompany.Advertisement

“But in the last two years they bought two, three, four, five good players and they improved as a team. I think Manuel is a good manager but every year (that) you can buy top players you can improve as a team.”
Mancini went on to manage Galatasaray before returning to Inter, where he previously won three Serie A titles.
But when asked if he would like to return to City or England one day, Mancini did not rule it out.
The 50-year-old said: “This is difficult, but before now I never thought I would come back to Inter. Football is strange.
“I would like to come back to England because the football is fantastic. In the future it is possible.”