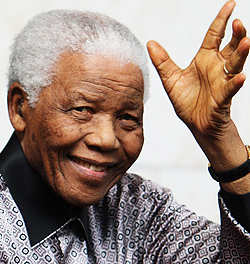 FIRST and foremost I would want to express my sincere condolences to the Mandela family, the people of South Africa for their loss and may his kind and selfless soul rest in peace. The man was a revolutionary first and global statesman second no doubt about that. It is quite endearing to see how the man was loved by so many, a hero to South Africans he helped liberate, a celebrity to those who once referred to him as a terrorist and detained indefinitely and a global statesman to those who heard about him.
Some have called him a “sell-out” who pandered to the whims of the racist apartheid system, some have labelled him a global icon and some Africans have remained neutral. Mandela brought political independence and peace to South Africa and at that contentious and crucial time political power was more than enough. Black South Africa had to learn to crawl before they could walk. The man deserves our respect as Africans. Let this African hero rest in peace after 27 years of torture, privation, humiliation and being broken by a racist and unforgiving system.
Let us respect and honour what Mandela stood for and not what he achieved or did not achieve and could not achieve. He was absent for 27 years and to be fair there was not enough time to achieve it all. The man has left a legacy for politically independent South Africa and for those who he forgave and indirectly or directly re-empowered. Africa has its heroes and legends and they are not worldwide political celebrities.
The Mandela legacy was hijacked by the same system that incarcerated and broke him. I sympathise with Mandela, a selfless man under siege from his own legacy due to the hypocrisy of a permanently irreversible racist system that continually manifests itself in duplicitous and disingenuous forms. One moment Mandela is a terrorist because of his pro-people policies, the next he is the world’s greatest statesman because his selflessness safeguarded the interests of white apartheid South Africa. It is quite insincere how the establishment wants the world to perceive this great son of Africa. He is portrayed as a man who forgave and forgot the evils of an unforgiving and relentless system that only serves its own interests and no one else; an unrepentant system that continues to deceive and misinform at the expense of the African continent.Advertisement

Mandela was a fiery and uncompromising young black African revolutionary who challenged a racist and unjust system. A young man with the African ideology indelibly tattooed on his spirit. 27 years in penitentiary for that ideological tattoo he paid. That is the Mandela the western media circus will never celebrate. The Mandela the racist system broke down we respect for his resilience and humility. The man had a cause, a just cause for that matter. The worldwide media celebrity that got separated from the revolutionary we still respect and honour. The establishment that separated the revolutionary from the man Africa must forever guard against.
I always wonder why men of principle and uncompromising commitment to the African ideology such  as Patrice Lumumba, Robert Mugabe, Kwame Nkrumah,  Steve Biko, Amilcar Cabral, Thomas Sankara and Muammar Gadaffi just to name a few have been confined to the back pages of history books. The common defining feature about these Africans is their unswerving assiduity to the African cause, to upgrade and economically empower black African lives.
The selfless, humble and broken Mandela had no choice but to choose peace and political power over economic emancipation. On the other hand the forgotten and invisible visionary African leaders put emphasis on cascading real power down to the people, advocating for policies that focused on African self-sustenance and self-reliance and deconstructing that neo-colonial structure that continues to render Africans perennially indebted to those who subjugated and economically raped the African continent for centuries.
Who really defines our heroes as Africans? How come it is African leaders who focused on ameliorating black African people’s lives who are portrayed as demons and devils worldwide? Patrice Lumumba was mercilessly slaughtered for his people-orientated policies and his resistance to Belgian neo-colonial advances in the Katanga region. Thomas Sankara, a morally upright and pragmatic African legend who at the time of his brutal assassination owned a Renault 5 car, a handful bikes and received a $450 a month salary has never and most likely will never feature on the celebrity-crazy establishment media.
Robert Mugabe has endured unimaginable western media onslaught and demonization for his unwavering committal to economically empower the people of Zimbabwe through his people-focused land reform and indigenisation policies. Colonel Gadaffi was callously and cowardly murdered for it. Lumumba suffered the same fate, so did Cabral. The African ideology will never be allowed to take root because it goes against the 500 year plan to continually exploit the continent of its abundant natural resources until fully exhausted. Any ideology that seeks to economically empower black Africa will forever be suffocated and ridiculed.
It is quite disheartening that our heroes are being defined by those who have historically relegated Africans to perpetual serfdom and servitude. Mandela is an African icon, a legend and revolutionary, a young man who got up one day and said enough is enough of this injustice and racism and the price he paid for his dedication to the African cause was 27 years in prison. An Africa which decides and defines its own heroes is a truly liberated Africa. Let us respect and honour our heroes and never forsake them because the establishment said so. Let us honour our heroes and respect them for putting their lives on hold to liberate us all.
Bernard Bwoni (the African ideology will not die)