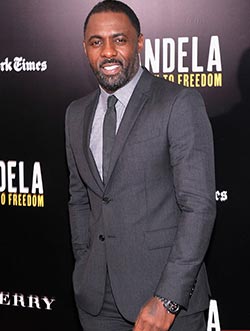 SOUTH Africans have flocked to see “Mandela: Long Walk to Freedom” since the death of the anti-apartheid hero at 95 last week, seizing what they see as a chance to reflect on his life.
The 150-minute biopic starring British actor Idris Elba as Mandela opened in South Africa just days before the nation’s first black president and Nobel Peace Prize laureate died at his Johannesburg home on Thursday.
South Africa’s main cinema chain suspended screening the day after Mandela’s death, but has since put on additional showings to meet increased demand as the country girds for memorial ceremonies, with nearly 90 world leaders attending, that will fete Mandela as one of history’s great peacemakers.
“After his death, I felt I owed it to him to just go watch and understand more about his life,” said 28-year-old Church Shikwambana, who saw the film in the capital, Pretoria.
The movie, based on Mandela’s 1994 autobiography, had its royal premiere in London on Thursday, attended by two of Mandela’s daughters and Britain’s Prince William and his wife, the Duchess of Cambridge.
The daughters were told of their father’s death just before the film started. They immediately left the cinema, but requested the premiere go on. The prince and duchess were only told of his death just before the end of the movie.
A somber Prince William told reporters afterwards that Mandela’s death was “extremely sad and tragic … We were just reminded of what an extraordinary and inspiring man Nelson Mandela was”.
Movie critics have often panned “Long Walk”, calling it “tangled” and “stodgy” in its attempt to squeeze into 2-1/2 hours the decades of struggle against white-minority rule that lead up to South Africa’s first democratic election in 1994.
However, actor Elba was been singled out as a “Mandela for the ages”, with some critics tipping him for an Oscar.
South African audiences have been much kinder to the film.
“It was powerful, the message of love,” said 37-year-old Skoko Sebola, who saw the movie with four co-workers in the upscale Johannesburg suburb of Sandton. The group had decided to see the movie in lieu of a year-end party.
But some think it is high time a local played their most famous countryman, who has been depicted previously by several American actors including Danny Glover, Morgan Freeman and Terrence Howard.Advertisement

“They should have used one of our South African actors as the main character of the movie,” said cinema-goer Shikwambana.
“There were some of the things that were said in English that would have meant a little bit more if they were said in one of our vernaculars, especially Xhosa because Mandela was Xhosa.”
Elba admitted he struggled with Mandela’s accent.
“I couldn’t do it at the beginning,” the London-born actor told Britain’s Telegraph newspaper. “I couldn’t understand what he’s doing to make him talk like that. And it turns out it’s his traditional language, Xhosa.”
Film-goer Peter Katiza, 37, said he thought Elba handled Mandela’s distinctive oratorical style with aplomb.
“He did a good job with the accent too, considering he’s not South African,” Katiza said.