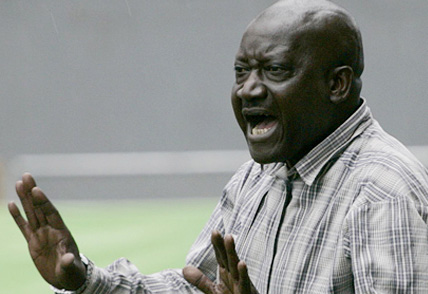 DAVID Mandigora is set for a sensational return to Dynamos by Christmas to replace Kalisto Pasuwa, who is leaving the Harare giants at the end of the month.
Mandigora, the Soccer Star of the Year in 1980, and the man who took Dynamos to the Caf Champions League semi-finals in 2008, is on the club’s shortlist of coaches likely to take over together with Tonderayi Ndiraya, a former assistant under Pasuwa.
Applications for the post were due to close on Monday with interviews to be conducted by the end of the week and an official unveiling next week.
Club secretary Webster Chikengezha said former players have an advantage, adding the club was likely to opt for an ex-player.
Mandigora also confirmed on Monday morning reports that he had sent in his application.
“Yes, I sent in my papers. I will wait for the interviews if I am invited,” Mandigora said briefly.
The former Lancashire Steel coach has always been in the shadows at Dynamos, having been linked with the club in early 2013 when there was talk of Pasuwa leaving.
Dynamos had also targeted former player and ex-Warriors coach Ian Gorowa, who is based in South Africa but turned down the offer. Former Highlanders coach Kelvin Kaindu was also in the picture.
Highlanders are also searching for a coach after the departure of Zambian Kaindu and they have so far received 12 applications, including one from South America, South Africa and England.
South African Clinton Larsen, who was tipped for the job, is out of the running after he was appointed Bloemfontein Celtic coach on Sunday night following the sacking of Ernst Middendorp.
From the local contingent, caretaker coach Mark Mathe has also put in his CV while Bosso have also tried to reach out to former FC Platinum and Hwange coach Tennant Chilumba.
Chilumba is now head coach at Power Dynamos in Zambia and his team finished in second spot to qualify for the Caf Champions League and is unlikely to make a return to the Bulawayo giants who finished fifth last season.
Former Dynamos and Platinum coach Lloyd Mutasa and Chicken Inn’s Mandla ‘Lulu’ Mpofu are also understood to have applied.Advertisement