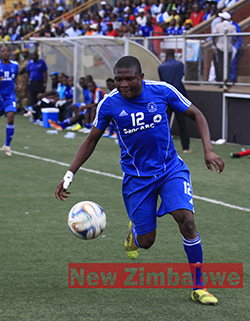 DYNAMOS coach David Mandigora is soaring with confidence and remains confident of successfully defending their league title.
The champions take on bogey army side Buffaloes at the National Sports Stadium on Saturday in their season opener hoping to get off to a good start.
Dynamos go into the match on the back of a morale boosting win against bitter rivals Caps United whom they beat 2-1 to advance to the final of the Zimbabwe National Army Charity Shield.
For the finals Mandigora’s side will face Highlanders who overcame How Mine in another semi-final.
Ghanaian import Erick Opoku and Patrick Khumbula scored the goals that counted for the Zimbabwe champions to progress to the final of the tournament.
Caps United secured their consolation courtesy of former Highlanders midfielder Hillary Muradzikwa.
The performance by Dynamos has left Mandigora bubbling with confidence and declared on Wednesday he was ready for battle.
“The victory over Caps United was a good for our supporters,” said the coach.
“They were happy but for us it’s a pre-season and I think it was a good preparation for our league game against Buffaloes. I can, so far, say I am happy and we are ready for the league championship.
“The result doesn’t really matter but I think we achieved what we wanted during the pre-season. It’s good also for the supporters and the players to get into the championship with a winning mentality.”
However, Buffaloes have given Dynamos problems in their recent meetings but are currently in turmoil after coach Moses Chunga resigned from his post.
In other matches, Caps United, under a new coach Mark Harrison, travel to Ascot to face Whawha FC while Highlanders make the trip to Harare to face ZPC Kariba at Gwanzura.
FIXTURES
Friday: Harare City v Tsholotsho FC (Rufaro Stadium)
Saturday: FC Platinum v Dongo Sawmill (Mandava Stadium), Chicken Inn v Flame Lily (Luveve Stadium), Dynamos v Buffaloes (NSS), ZPC Kariba v Highlanders (Gwanzura Stadium)
Sunday: Triangle United v Hwange (Gibbo Stadium), How Mine v Chapungu (Luveve Stadium), Whawha FC v Caps United (Ascot Stadium)Advertisement