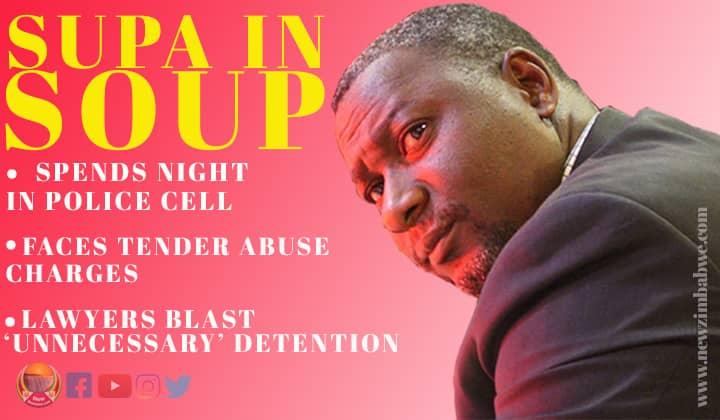 Both police and his lawyers confirmed the Zanu PF MP for Nyanga South was spending a night in police cells.

“Yes he is in custody pending court appearance tomorrow. The last time I checked he was being held at Harare Central earlier in the day,” said national spokesperson Senior Assistant Commissioner Paul Nyathi.

While the former ZBC news anchor was arrested by police from Serious Frauds Squad in Harare’s CBD, the choice of Matapi Police Station for his detention left a lot of questions.

Mandiwanzira handed himself to the police on his return from a private trip in China on Tuesday.

He was being sought over abuse of office claims linked to the improper awarding of a consultancy tender to a company called Megawatt to provide services to state owned telecommunications company, NetOne.

The AB Communications proprietor allegedly engaged the firm owned by a Chinese national without going to tender before directing NetOne to pay $5 million to the said company.

He was also charged for the improper appointment of his personal assistant, Tawanda Chinembiri to the Postal and Telecommunications Regulatory Authority board.

This allegedly led to the loss of $35 000 by POTRAZ through allowances drawn by Chinembiri.

In a statement, the lawyers, who are instructed by senior lawyer Selby Hwacha of Dube, Manikai & Hwacha said the detention was unwarranted.

“Given the clear and substantiated explanations which he furnished to the police, both Hon Mandiwanzira and his defence team are of the view that his sudden and unexpected detention was heavy handed, unwarranted and unfortunate.

“The defence team is of the view that there is no factual, logical or legal basis for the detention.”

Mandiwanzira’s lawyers said their client had cut short his business trip to China to voluntarily visit the police after he was made aware of their interest to question him over the alleged offences.

“Normally the purpose of arrest and detention is to ensure that persons facing charges do not abscond.

“After flying in from China in order to present himself this morning, his detention became completely unnecessary,” they said.

The lawyers said Mandiwanzira’s hands were clean in the alleged offence and expressed confidence the media business operator would be cleared of the charges.

“Honourable Mandiwanzira has no improper business relationships with Megawatt Company through which NetOne recovered millions of dollars which had been stolen.

“He remains confident that the due process will absolve him of any wrong doing arising from the false allegations raised against him,” the lawyers said.