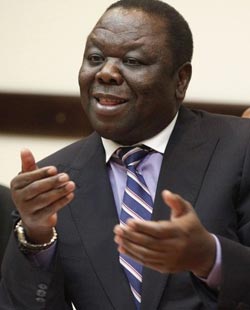 I HAVE had time to read and reflect on the contents and the context of the MDC deputy treasurer Elton Mangoma’s letter on leadership renewal and his call for Morgan Tsvangirai to leave the position of president of the MDC and I am inclined to agree with Mangoma’s proposals as the panacea to the challenges engulfing the MDC.
It is sad that some people who have barely read the letter have directed verbosity and are hurling verbal violence at Mangoma with naught appreciation of the contents and context of his letter. Some have resorted to name calling while others to emotional explosions, with some even threatening to die. Some have resorted to social media platforms where everyone and anyone with a different opinion is threatened with physical violence.
The central motif in Mangoma’s letter is that Tsvangirai has done a lot for the MDC and the people of Zimbabwe but however he has reached a point where he cannot do more and as such must gracefully leave the office of the president. As Mangoma puts it, the MDC is at a crossroads following the outcome of the July election. This has been compounded by the failure by the party to enunciate a programme of action after the electoral “loss”. Instead of dominating headlines with programmes and policy pronouncements that bear meaning to the people of Zimbabwe, Tsvangirai’s malfeasances have come to be the subject of the formula.
Tsvangirai’s escapades with women of all ages have all but demonstrated that he is incapable of managing his own affairs – what more national issues. His love affairs with numerous women from South Africa to Bulawayo – and God knows where else – which he has not denied even to this point, have eroded the confidence people had in him. The Zimbabwean society, with our strong moral beliefs, does not condone such kind of impish behaviour particularly from people who ought to be leaders in society. The electorate will punish them.
It is also evident that despite Tsvangirai’s deportment and assertion that he stands for and with the poor, he has long abandoned them. The shift in his lifestyle after joining government is confirmation of his penchant for the odorous things in life and livin la vida loca. Leaving in a five million dollar mansion whose acquisition is shrouded in a lot mystery; crisscrossing the world in a an exorbitantly priced yacht, the Legend of the Seas; the one million dollar shameful so-called wedding ceremony at the aristocratic Rain Tree and many other blue-blooded tendencies all but confirm his departure from the founding ideology of the MDC. As aptly put by Mangoma, Tsvangirai has reached diminishing returns and no longer instils confidence in the electorate anymore. His leadership qualities, perforated by his unquenchable appetite for women, have to put a dent on the electorates’ confidence in the party and have thrown the party into disgrace. Tsvangirai’s personal behaviour is the least one can expect from a leader and is crippling the party. Mangoma presents five critical questions which even zealous MDC activists have not answered.Advertisement

I repeat these questions for the convenience of these zealous supporters and those who have not bothered to read his document; 1) How will you be able to undertake the reform agenda that we failed to do when we were in government and you had executive power? 2) How will you answer the questions that we failed to care enough for our people and that we used our time in government for personal aggrandizement, personal wealth accumulation as symbolized by the current impasse on Highlands residence? 3) How will you put closure to the issue of women in your life and ensure that these will not continue to erode your and the party’s brand? 4) How will we put closure to the question of misuse of funds, and ensure that our friends regain confidence that donations will be channelled to the people’s project going forward? 5) How will we make sure that trust, team spirit and mutual confidence, currently eroded through the misconduct of the primary elections, violence visited on staff and myself, lack of constitutionalism and failure to follow procedure on appointment of officers to the National Executive and key public offices including diplomatic posts is restored?
These are hard-hitting questions that demand answers and it is clear that Tsvangirai does not have an answer to each of these questions. Even those who are saying Mangoma is erroneous have not even attempted to answer a single question. These are the questions the electorate is asking. These are questions even numerous people in the MDC structures are asking. With the Zimbabwean economy in calamitous distress and with Zanu PF drably failing to deliver on their election promises, Mangoma makes a precise point that a strong MDC is not a luxury but a necessity. He is also correct that Tsvangirai, in his current state, is not able to provide the requisite leadership.
The challenge confronting the MDC today lies in the transmission and perfection of decadent habits that are exhibited by Zanu PF. The culture of violence, intolerance and hubris, among other sickening traits, are surely finding root in the party. MDC activists need to understand that even if they love Tsvangirai to the bone marrow, their support alone is not sufficient to deliver election victory for the MDC. An MDC leader, as Mangoma rightfully puts it, also needs to instil confidence in the electorate. Activists must also desist from comparing Tsvangirai to Mugabe and saying because Mugabe did it then Tsvangirai can also do it. There is wisdom in daring to be different.
Mangoma is also right that if the MDC entertains any hope of being present on the Zimbabwean political scene in the longer term, it requires a new leadership to instil confidence in the electorate. Tsvangirai is not the MDC and the MDC is not Tsvangirai. In any normal democratic party, a leader who loses elections as Tsvangirai has done becomes a liability to the party. Tsvangirai’s brand is not distending but tumbling. He should not take the party down that road.
Thus, and to any forward thinking person who yearns for democracy in Zimbabwe and in the MDC, Mangoma is accurate. Tsvangirai must do the honourable thing and leave the office of the MDC president and allow the party to move forward. The argument that he needs to complete his five-year term sounds obnoxious and unrelated to the party mandate which is to deliver the people of Zimbabwe from political, social and economic challenges. It is clear to me that for the party to move forward, Tsvangirai must be able to answer Mangoma’s questions in the affirmative; that would be a good starting point. That is a demonstration of accountable and transparent leadership.
Claire Matombo is an MDC activist who lives in Harare. She can be contacted on clairematombo@yahoo.com